Speaking the Local Language: Not Required 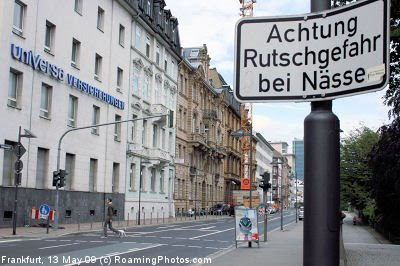 I hardly speak a word of German, but this in no way hindered my visit to Frankfurt. Since English has Germanic roots, I can decode some written German and most of the critical instructions on signs. In a pinch, I could probably produce a few simple words like "ja" und "nein", but I rarely attempt to use them. Why not? It creates too much confusion. The local speaker's English is almost always better than my German/French/Italian/Spanish, so I want to make it immediately clear what language I'm best at.

The key to language survival in Europe: Speak English! Just clear, slow, simple English. You should attempt the foreign language only if English doesn't work. Don't believe that bullshit from your French teacher that locals appreciate you trying to speak their language even if you do it poorly. What people appreciate most of all is lack of ambiguity.

In my new on-line language course (coming as soon as I can find funding), I will teach you how to order things in any foreign country and usually get what you want. For example, here is how to order a Big Mac™ in Paris: "Could I have a Big Mac please." Chances are, your order taker will speak enough English or universal sign language to guide you through the process.

Although I do speak a little French, I have often been tripped up by trying to order food or ask questions in that language. The order taker assumes I speak perfect French, rattles off options faster than I can process them, and the encounter quickly degenerates into chaos. That rarely happens when I try English first.

Not knowing the local language is rarely a burden when traveling on well-worn tourist trails. English is spoken by nearly everyone who deals with the traveling public, and nearly every citizen has had some English in school. Remember that all the worldwide pop stars sing in English, so some of it ought to have filtered through.

In polyglot Europe, most critical signage is in universal pictograph form: male and female figures for restrooms, etc. It also helps to have done your research and to know where you are going, so you don't need to ask for directions.

When you pass someone in the street, say "Hello," and when you have to squeeze by them on the train, say "Excuse me," even if you know the local phrases. It's just a way of making your identity clear.

If you encounter a situation where you are unable to make your wishes known using English, you can try some local words, but at least then it's clear that you're a novice, and your listener will probably slow down to your pace.

So how are you going to learn the language if you don't try to speak it. My theory is that you should start with the written language and listening to other people speak. When you can both read a newspaper and understand most of what is being said on TV, you are ready to start speaking. I know it's a pretty high threshold to cross, and you might never get there. The fact is, it is pretty hard to learn a foreign language when you're not exposed to it on a regular basis. If you live in Detroit and are struggling to speak Swedish, at a certain point you have to ask yourself, "Is this really worth the effort?" If, on the other hand, you live in a multicultural neighborhood where half the kids speak Spanish, you are probably going to pick it up fairly quickly.

I have no confidence in any class or software package to teach you a foreign language. The one thing these programs can't provide is motivation. If you're in Detroit trying to learn Swedish via Rosetta Stone™, you're probably still going to give it up eventually. No software package is going to help you when learning the language doesn't make much sense to begin with.

Personally, I am constantly studying foreign languages, but not to speak. I find that the greatest benefit of foreign language exposure is what it teaches me about my own. I feel that my own writing in English has been enhanced by my study of French and other languages. It makes me see that other sentence structures are possible, and it sometimes gives me access to English words and phrases that I might not otherwise use. My pride, however, still lies in English--in thoroughly understanding my own language not someone else's.

If you had a 1000 years to live, you might learn every language on the planet, but you don't, so you have to focus on your native talents and on what is important to learn in your limited time left.

If you are truly fluent in a language, by all means speak it, but if you aren't, don't try to fake it. Just be yourself!

©2009, Glenn Campbell, PO Box 30303, Las Vegas, NV 89173.
Released from Wilson, North Carolina.
You can Retweet this article on Twitter™.
You are welcome to comment on this entry below.
Posted by Glenn Campbell at 6:11 AM