The Prison of Home Ownership 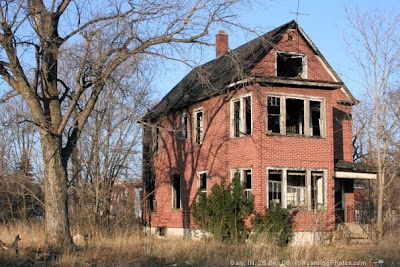 What could be worse than homelessness? What could be harder on the soul than living hand-to-mouth, owning nothing and sleeping each night wherever you can make do? Well, I’ll tell you.

That’s the opposite of homelessness, right? It can also be an even worse hell if the home you are committed to starts to exceed your resources.

In the current economy, lots of people are discovering that hell. They are losing their jobs, and although they may still have some money coming in, it isn’t enough to support the huge, unwieldy infrastructure they have committed themselves to. Now they must face the trauma of forced downsizing. The simple struggle of living hand-to-mouth can’t compare to the extreme pain of living in a collapsing system.

The American Dream is supposedly home ownership. It’s our cultural standard. As soon as you have the means to do so, you’re supposed be committed to real estate. But people don’t realize when they enter the dream how quickly it can turn to a nightmare.

To begin with, people don’t just buy a home with the resources they have. They buy it based on the speculation of future resources. That sets people up for disaster, because one future possibility, even in the best of times, that you don’t always have the same resources you have now.

If a worker gets a raise—say, to $80,000 a year—he inevitably starts planning his future based on that continued income. He commits himself to a hefty mortgage and the lifestyle of a new community. $80,000 might have seemed like a lot of money once upon a time, but instead of simply pocketing the cash, the average Joe just uses it to raise the bar—that is, to expand his lifestyle and his commitments so all the extra resources are used up. Now, if his income happens to drop, say, to $50,000, he can find himself in dire straits. He may not be “poor” in technical terms, but his income no longer meets his commitments, and his system descends into chaos.

At times like that, living under a bridge can look really good! The key asset in life, you may discover too late, is not money but freedom. How easily can you shift gears to respond to new opportunities and life’s unexpected turns? How much do you really control your own fate? Just because you’re rich in money doesn’t mean you’re rich in time, and it’s the time that will run out first.

Whenever people have more resources than they need to survive, their commitments and expectations tend to expand to absorb them. I call this phenomenon “taste inflation”. (See Kilroy Café #36.) As your resources increase, so do your perceived tastes and needs, so your extra resources are absorbed and you don’t feel so rich anymore.

This would be relatively benign if your tastes expanded only in the moment, but when you contractually commit yourself to these new tastes (say, by buying a bigger house), then you place yourself in great peril. You have no choice now but to maintain this resource level regardless of the circumstances.

What space do you really need to live in? The optimum of economy is an 8 by 8-foot box, like an officer’s cabin in a Navy ship, with enough space to lie down, sit up and store a few basic essentials. I say 64 square feet is all you really need in life. It gives you room to sleep, to work in private, to communicate in private with others (nudge, nudge, wink, wink!) and to safely store some key belongings. All other business can be conducted in non-private facilities elsewhere. If that’s all the space you have, you’ll use it well, and you won’t be collecting things you don’t need. When you exceed this standard, your life starts to spin out of control as your possessions start possessing you.

Part of the hell of home ownership is not just the burden of paying for it, but also all the CRAP that collects in that extra space. This is stuff you don’t need, that serves no substantial purpose in your life but that you nonetheless find yourself committed to protecting and maintaining. The CRAP includes not just physical possessions but also activities attached to those possessions. If you have space for a garden, you’ll plant a garden, but then the garden has to be maintained on a daily basis. Every extra room you have has to be kept clean. Soon the needs of the home expand to the point where it owns you and most of your limited time on Earth consists of serving its demands.

This is fine if all you expect to accomplish in life is to maintain a home: You buy a nice house, feed and maintain it for the rest of your life, then you die. However, if you happen to have other goals, the home can only be a burden. In the best of times, it slows your personal development, and in the worst of times it can utterly cripple you.

Call me a radical, but I think what matters in life is what you accomplish, not the physical plant you live in or moss you collect around it. If the mere processes of living take you over—e.g., the nice furniture, the pretty sheets, the potpourri on the bed table—then the actually content of your life—what you do and achieve—is bound to suffer.