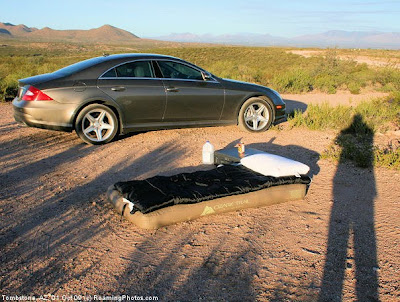 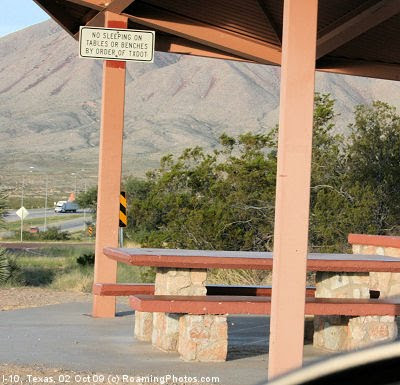 "No Sleeping on Tables or Benches" it said. Notice, however, that there's no sign saying you can't sleep under the tables or beside benches, so that's what I did. I stopped at an unlit picnic area where a dozen trucks were parked for the night. I chose a covered picnic shelter like the one above, since there was a threat of rain.It was dark enough that no one would see me, and I doubted narco-traffickers would hold any picnics here. I blew up my air mattress on the concrete pad beside a picnic table and put my sleeping bag on it. Since it was dark and I was parked a good distance away from my valuable car, I felt that my odds of survival were about the same as staying at the Motel 6--which is all I really ask in life. Just before dawn, my BlackBerry alarm woke me, then I packed up and left before anyone was the wiser. I got about 6 hours of quality sleep. Mission accomplished! Texas is a LONG drive, about 1000 miles stem-to-stern. I spent a night with relatives in Austin, but I needed to camp again in East Texas. I chose this abandoned farmhouse... 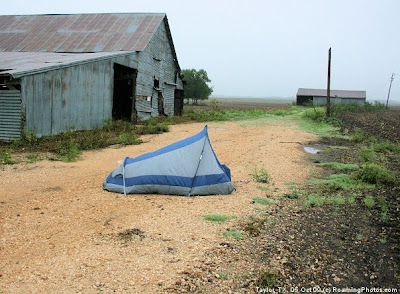 It was certainly private property but there was little chance of detection, since I was protected by darkness and broke camp just after dawn. I was far enough from the border that crime wasn't a issue. (There farmhouse was surrounded by miles of empty fields.) Still, this campsite was hard to find at night, and as I headed east there would be even more fences. East of the Mississippi, it's pretty hard to find abandoned farmhouses like the one above. Where could I reliably find a free campsite? (Stay tuned for the answer.)
Posted by Glenn Campbell at 3:24 PM