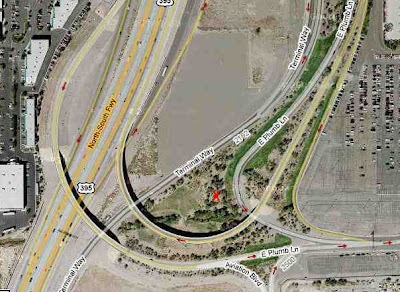 This past May, I had a social event to attend in Reno. As usual, I could fly there for free, but I couldn't afford lodging. And even if I had the money, formal lodging wouldn't make a lot of sense, since I planned to sleep for only 4-5 hours before flying out in the morning. To maximize my sleep time, a free location I could walk to from the airport would beat a downtown hotel room at any price. The weather forecast was good, with no chance of rain, so all I really needed was a place to lay out my sleeping bag without fear of human contact.

The trouble with Reno is that it's desert. There are no mosquitoes, but there's also not much foliage to hide in. Large plants don't grow without irrigation. The area around the airport is densely occupied, without much vacant land. Where was I going to camp?

(The Reno airport is a small one where the secure areas close at night, so I wasn't comfortable sleeping at the airport.)

I turned to Google Earth to find some potential sites (actually, Google Maps, since I find it easier to use). I focused on the location above, just a short walk from the airport terminal. (Here is the Google Maps link.) It appeared to be landscaping in the unused median between roadways. If you compare this land to the size of the cars in the parking lot, you see that it's quite spacious. The surrounding neighborhood is industrial (no houses), so there's no reason for anyone to be passing through at night.

When I got there during the day, I found it was perfect! It was just as envisioned, with no telltale signs of other homeless people (i.e. no trash). I hid my sleeping bag in the bushes and then came back after midnight to set up camp (at the "X" in the photo). The greenery you see in the aerial photo was indeed irrigated trees and large bushes, and the only people I would expect to come here were grounds-keeping staff maintaining the irrigation. They would be visiting only during the day, so I felt secure there at night.

Landscaping can be a wonderful place to spend the night -- as long as you break camp before dawn. There's one concern, though: The sprinklers usually come on at night! I you choose a nice green lawn, you might find yourself irrigated sometime in the early morning hours. However, trees and bushes are usually irrigated by drip systems, and if you find the drip heads, you can avoid getting wet.

The only camping supplies I had were a tarp (for as a groundcover) and a mummy sleeping bag. I would have brought an air mattress had I wanted a sound night's sleep, but I only expected a few hours of "adequate" sleep before flying out in the morning. I had previously consulted the weather forecast and found that the nighttime temp would be in the 40s. In the absence of rain or high winds, this is fine sleeping weather! If you sleep in your clothes and a jacket, a mummy bag is adequate. (If the temp goes below freezing, you'd probably need two sleeping bags, and you'd want a tent if there was rain or snow in the forecast.)

It went without a hitch! I encountered no humans, got a few hours of adequate sleep (enough to maintain my sanity), then broke camp before dawn. No one knew I was there, which is the ideal circumstance. Yes, I was probably sleeping in a place I shouldn't (probably on airport land), but are police or airport security going to comb the bushes every night?

Compare my luxurious digs to the way the locals sleep in downtown Reno (taken on the same night).... 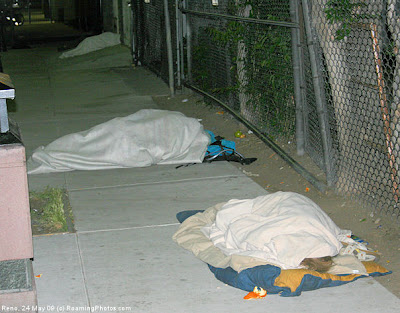 This campsite selection can only be regarded as stupid. Out in the open like that, you're a target for thieves and thugs. The thing that separates me from these people isn't money but brains. The worst place to be if you're homeless is Downtown Anywhere. Homeless life is always better in the suburbs or the edges of town, and the rent isn't any higher. Why, then, do the visible homeless always seem to gravitate downtown?

On possible theory: drugs. If you need access to booze or whatever your preferred drug may be, maybe downtown is the best place to find it. But drugs don't explain the phenomenon completely. I think homeless people, like humans everywhere, have a need for community and territory. They are attached to other people in their neighborhood -- and to their neighborhood itself -- and they're afraid of being alone or detaching themselves from familiar surroundings. How else do you explain homeless people remaining in a harsh environment like Manhattan or downtown Chicago?

If you're a homeless person with any capacity for logic, you're obviously going to migrate to where the weather and living conditions are best. The fact that someone hangs out downtown is a pretty good sign that their higher cognitive functions have broken down -- from drugs or mental illness -- and they have gone back to their animal instincts of sticking to the surroundings they know.

Since I'm suffering from neither drugs nor mental illness (to the best of my knowledge), I'm going to use all the resources at my disposal to find a safe and comfortable camping spot away from human contact. If others prefer to be miserable, that's their choice.
Posted by Glenn Campbell at 1:05 AM