Where to Sleep in an Airport

The very comfortable overnight accommodations at the Philadelphia airport.
In an earlier entry, I discussed How to Sleep in the Airport. In the entry below, I will review some actual airports as to their sleeping potential. Some of these airports I have slept at myself, while others I have only surveyed.

As I mentioned in the earlier article, the main factors that make an airport "sleepable" are (a) the secure concourses remain open all night, and (b) there is seating without armrests. If you are limber, you can sleep on seating with armrests by wrapping yourself around an armrest in the fetal position, but it's an acquired skill and seating without armrests is far more comfortable. At a nice sleepable airport, you can arrive on an evening flight and simply decline to leave security until morning.

The most critical pieces of equipment for airport (and airplane) sleeping are warm clothing, a light blanket, eye covering and earplugs.

NOTE: If you have check baggage and you fail to claim it right away, it will still wait for you. You might get a call from the airline baggage claim office, but you just tell them you'll pick up your bags in the morning. In other words, free baggage storage!

Here are some specific airports I have dealt with personally. I will revise this list as I gain more experience.

PHL (Philadelphia) - An excellent sleeping airport! (Shown above.) Spent many nights here. The older seating in the B and C gates is well padded and has no arm rests. (A gates have armrests.) Constant CNN and security announcements make earplugs a must! There's a wide variety of food available here at reasonable prices. Only once was I woken by an airport employee—to give me a pillow and foil blanket. Free WiFi™ on weekends only.

PHX (Phoenix) - Another great sleeping airport, with lots of well padded seating and no arm rests on any seating. Food is limited and very expensive so bring your own. Free WiFi™!

MSP (Minneapolis) - I haven't slept here but have surveyed the airport. Looks like a good one for sleeping. Open all night and offers a wide variety of seating and hidden nooks. No free WiFi™.

CLT (Charlotte) - The secure concourses close at night and they kick you out. However, I have successfully spent the night in the baggage claim area (on seating with armrests). A city bus will take you to a Super Evil Mega-Mart™ for supplies. Free WiFi™!

DEN (Denver) - Terminal open all night, but all of the seating has armrests. (Photo below.) As matter of fact, I spent the night here last night! (I'm writing this entry just a few feet away from the scene below.) I eventually found the carpeted floor more comfortable than the seating. (I must be getting out of shape.) Wide food choices both inside and outside security, but generally overpriced. (Big Mac™ is $4.15, but Panda Express™ two-item place is only $6.95.) 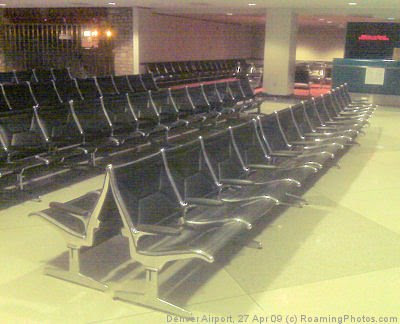 The less-than-comfortable seating at the Denver airport.
FLL (Fort Lauderdale) - Secure concourses close at night. An acquaintance says he once slept in in baggage claim, but it seemed too harsh and exposed for my liking. Instead I left the airport and slept on a hidden grassy area nearby. (Sometimes a good option when the weather is tropical and no rain is in the forecast.)

LAS (Las Vegas) - The secure concourses remain open all night, but all seating has armrests. Food is limited and atrociously priced. In the non-secure areas at night, there are usually a few busted-out gamblers asleep, waiting for their flights the next morning. Signs on the entry doors say you can't be in the non-secure areas between 2am and 5am, unless you have a ticket or boarding pass, which is almost an invitation to sleep there if you do. (Still, I would do it only if forced to. Consider the hostel options.)

You probably can't sleep in most small-city airports or in large ones that have separate terminal buildings for each airline, because the terminals close at night. I assume (but have not confirmed) that this is the case at MIA, BOS, LGA, JFK, PDX, SFO and any airport without an airline hub.

In general, a big-city airport with many interconnected concourses is likely to remain open all night, and if it is, you can probably linger within the secure areas without anyone questioning your presence. Of course, once you leave the secure area, you can't get back in without a valid boarding pass, but you don't need one to remain in the secure area once you are already there. (An unexpected side-effect of heightened airport security is that travelers inside security are questioned, since they have already been heavily screened.)

Outside the secure area, you are more likely to be questioned, since the "homeless homeless" have also taken to sleeping in airports. Here are some articles on the airport homeless...

Again, you avoid being associated with them by remaining within the secure areas where the ticketless can't go. Big airports also won't usually evict you from non-secure areas if you have a ticket for a flight the next morning.

When I'm sleeping at airport, I usually have a cover story in mind (bumped from flight, taking another one in the morning, etc.), but no one has ever questioned me or asked me for ID or boarding pass.

At small-city airports, where I know I can't sleep, I will survey the neighborhood beforehand via Google Earth™ for potential camping spots. Small airports often have woods or fields around them. At BHB (Bar Harbor, Maine) I successfully used this method to confirm the terrain, then slept in a grassy hollow a few hundred yards from the terminal. The advantage of camping near the airport is that you don't have to haul your equipment very far, then you can hide it in the bushes until your departure. Wherever there are woods, you are probably going to need a tent to protect you from bugs, but a simple pup tent will do. As usual, you probably want to break camp before dawn to avoid discovery.

I don't know enough about overseas airports to say which ones are sleepable, but the same general rules probably apply. In every big European airport, you are likely to find travelers sleeping in the non-secure areas waiting to check in for flights the next morning. The situation is rarely comfortable, but it is usually safe and might get you by in a pinch. (I did this at the Dublin airport when I couldn't find a hostel.) As long as you have a ticket for a flight the next morning, you are unlikely to be evicted. I would worry a little more about theft however, since anyone can get into the non-secure areas.

A few European airports with big international hubs may have hostel-like "sleeping rooms" available within security, where you can spend the night for a relatively low price. I stayed in one of these at the Amsterdam airport many years ago.

I'll add more airport data here as I collect it.

Also see How to Sleep in an Airport and Free Airport Wifi™.
Posted by Glenn Campbell at 8:07 AM