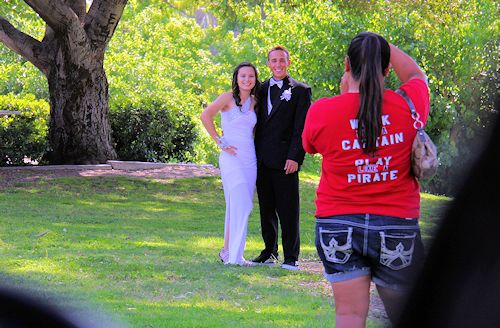 Porterville, California, April 27, 2013. The photo above that I took in a city park earned me a visit and lengthy interview from the local police department. In the course of the encounter, the officer took a photo of me and even asked me for my shoe size! Here is the full story:

I was on a week-long "working vacation" in California, doing some sightseeing but also working on a book. I had just visited Sequoia National Forest and I was now in this small Central Valley city just below the mountains. I was sitting in my rental car in a city park (Murry Park) working on my computer when this couple appeared directly in front of me. I couldn't resist the free photo op! I picked up my camera from the car seat beside me and took six frames while still sitting in the drivers seat of the car. (The best photo is above.) I was using a telephoto lens (on my Canon 60D), so the couple was actually quite far away. The "bride" said, "Hey, he's taking pictures!" at which point I stopped shooting, put down the camera, smiled and waved. I didn't want to make them uncomfortable. My whole photo shoot lasted 20 seconds at most. The group got back into the car next to mine. Although my windows were open and they were just a few feet away, they didn't say anything to me.

(I assumed at the time that it was a wedding couple, but a friend points out that these are probably prom outfits. Not elaborate enough for a wedding, and the "groom" is wearing sneakers.)

About an hour after they left, an officer of the Porterville Police Department arrived in a cruiser. He said that someone has reported me for taking photos. (It could only have been the prom party, and I assume it was the girl, since she was the only one who seemed to notice me.) The officer was very friendly and agreed that I was doing nothing illegal, but we had a very long interview anyway (with him standing outside my vehicle and me inside with a computer on my lap). I was asked about who I was, where I had been, where I was going. I was happy to answer, because I had nothing to hide. The officer took my licence back to his cruiser where he said he was filling out a written report. Then he came back to the car and asked if he could take my photo (with a small camera he brought from his cruiser). I laughed at that! I said that since I was taking photos of the wedding party without their permission, I couldn't object to him taking a photo of me! He asked me to step out of the car for the photo, which I did. I gave him a big smile as he took a photo of me standing in front of my rental car.

After that, he asked me more information for his report. He asked for my height, and I pointed out that it was on my driver's licence which he held in his hand. He also asked for my social security number (which was not on my license) and my phone number. He then asked for my shoe size. I drew the line at this. I laughed and told him I was asserting my "Miranda rights" and I refused to give him my shoe size. He guessed that my shoe size was 10, but I refused to confirm or deny this information. The officer completed his report; we chatted a bit, and he left.

My actual photography of the couple lasted no more than 20 seconds. Six quick photos. The interview with the officer lasted about 20 minutes. The officer never asked to see the photos I had taken, and I did not offer to show them to him. Although the encounter was cordial, the incident struck me as petty and a senseless waste of police resources. Can you imagine the LAPD responding to a complaint like this and spending so much time on it? (I'm sure the first question of LAPD dispatchers would be, "What law has allegedly been violated here?") What was the bigger personal intrusion: my photography or the police interview?

After the officer left, I decided it was time to depart the park. I moved to the parking lot of the local Walmart, where I knew I wouldn't be hassled, and I continued working on my computer for a few hours. (I was publishing a new ebook, "Kilroy Cafe".) After nightfall, I decided to leave Porterville forever.

But leaving Porterville wasn't so easy. Rather like a Stephen King novel where a character tries to get out of a small rural town but can't. The story continues...

During this week-long visit to California, I was sleeping in my rental car at night. I usually have no problem with this. The weather was nice, and I usually choose my overnight parking locations well, so people don't notice me. Sometimes I sleep in Walmart parking lots, but it was too warm for that. I needed a remote place to park where I could open the car windows.

After dark, I headed out of Porterville toward the west, until I thought I was beyond the city limits. I didn't want another encounter with the Porterville police! I found what I thought was an empty desert area near an aquaduct. It was dark, but I saw no habitation around, so I pulled into the desert, well away from the road.

I went to sleep in the back seat, only be wakened about an hour later by... another police officer! He was in a different uniform and a different style of car, so I assume he was a county officer. He said that a neighbor had reported me. I was surprised, because I looked around me and could see no neighbors, just dark desert. The officer agreed that I wasn't doing anything wrong, but he took my license back to his cruiser.

When he returned to my car, he commented on my camera on the passenger seat, which suggested to me that he now knew about the earlier photography incident.

"You weren't out here taking pictures of people were you?" he asked.

I assured him that I was here only to sleep. (I did not bother to point out to him that, in this location, there was no one to take pictures of!)

The officer did not tell me that sleeping in a car was illegal, and he did not ask me to move, but I offered to move anyway. He agreed that this was probably a good idea because the current situation we "just a little creepy." He suggested the I go back to town and sleep in the Walmart parking lot.

At this point, there was NO WAY I was returning to Porterville! I could imagine this thing growing bigger and bigger, with vague suspicions about this outsider continuing to grow until they found something to charge me with.

After the county officer left, I got back on the road and continued west. Although it was late, I was now determined to get out of this county as quickly as possible! I drove for a hour until I was sure I was beyond Tulare County. I found a safe parking place near the main freeway, and I got at least a few hours sleep without further interruption.

Nice town, Porterville. I can tell people are concerned about safety. When you urge people, "If you see something, say something," they apparently take it seriously. And without much crime, police apparently have a LOT of time to investigate suspicious activities. Still, for a guy like me, engaged in "unusual" activities or lifestyle, this small town Utopia can get tired really fast.

I'm still in the desert as I write this (near Palmdale on April 30), but the Big City is looking really attractive right now! There, they have something called "crime", which is good in a way. At least it keeps the police occupied and off the backs of people whose only crime is being "unusual".

If you happen to know the couple in the photo, perhaps you can forward the photo to them. (Shot April 27, 2013 around 4pm in Murry Park in Porterville, California, and photographed in Murry Park.) Here is the hi-res photo on Facebook.
Posted by Glenn Campbell at 8:30 AM 2 comments: