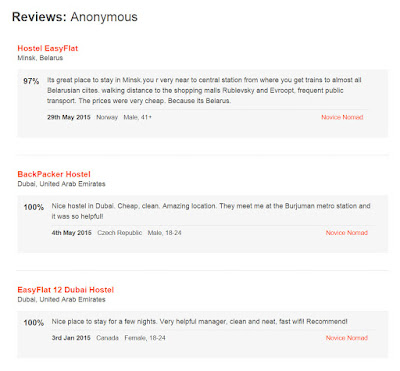 I love HostelWorld.com. It has opened the world to me more than any other tool apart from the airplane. Whenever I travel to a new city, this website means I can find a safe, comfortable place to sleep, endorsed by the reviews of previous guests.

But what happens when those guests aren't real? In the course of my planning for a round-the-world trip, I stumbled on a hostel operator in Dubai who has fabricated at least 39 positive reviews for his properties, obviously attempting to counteract his many negative reviews. Generating fake reviews is easy enough to do: You just create a bogus account on HostelWorld, make a reservation for your property, then leave a review after the reservation date has passed. (You pay a reservation fee but don't have to pay for the bed.)

Check out the hostels in question (2 in Dubai and 1 in Minsk) and look carefully at the reviews.

Most of the reviews from experienced travelers are poor. Here is one offering a 34% rating....


There is no facilities at all and the toilet is extremely dirty and disorganized. The place is an "office" in a commercial building with 5 bunk beds, one toilet and one sink. There is a small round table for four people and a wardrobe.

I count seven dubious Novice Nomads who have each left reviews for only these three properties. Here they are: User1, User2, User3, User4, User5, User6, User7, How likely is it that one person, new to hosteling, would just happen to stay at all three hostels from the same operator? Furthermore their nationality changes in each review. How likely is is that one person would stay at all three hostels and change their nationality twice? There are 9 more Novice Nomads who reviewed only the two Dubai hostels while switching nationalities. All the positive reviewers are "Anonymous", whereas many of the negative reviews are not.

One reviewer not only changed their nationality (from Norway to Czech Republic to Canada) but also changed their gender.... (See review at top and click to enlarge)

The value of HostelWorld depends entirely on the veracity of their user reviews. My faith in their system has been shaken because they have taken no action more than two weeks after I first alerted them. In that time, at lot of innocent travelers have been seduced by an fraud facilitated by HostelWorld. It seems they are not really committed to keeping reviews honest.

My two emails to HostelWorld received replies but no action. When I first emailed on May 24, 2015. Alejandro at HostelWorld wrote: "We will appreciate your feedback and we will look into this matter internally in order to clarify if there is any sort of issue."

Two days later (May 27), I emailed Alejandro links to all 16 of the fake reviewers I identified (Novice Nomads who reviewed more than one of the properties and no others). He wrote back: "We are investigating this issue directly with the hostel in order to clarify if there was any sort of irregularity."

It is now June 15. In the meantime, dozens of innocent traveler have probably been booking these hostels thinking the ratings are higher than they really are. What sort of investigation is needed? At least 39 reviews are provably fake, and dozens more are suspicious (Novice Nomads who have produced only one review). How long does HostelWorld need?

I can't see the necessity to "clarify with the hostel" when their reviews are physically impossible (like the reviewer changing both their nationality and gender).. What kind of clarity can be expected?

I have now doubt that these phony hostels will eventually be removed from HostelWorld, especially if I keep harassing them about it. The real question now is how long it will take. Here we have overwhelming evidence of fraud by an operator who isn't very bright. If HostelWorld can't act quickly on this one, you begin to question every hostel listing.

When HostelWorld finally does remove these hostel listings, what is going to happen to people who have already booked these hostels. Are they going to arrive in Dubai to a hostel that isn't what it claims to be or that might not even exist? Will they be informed of the fraud?

My own solution: I booked a regular hotel on Expedia for only about $10 more.

Looking through the reviews for Easyflat 12 Dubai, I find some interesting new data. Here are the latest reviews to date, which are pretty dismal. (Click to enlarge.) 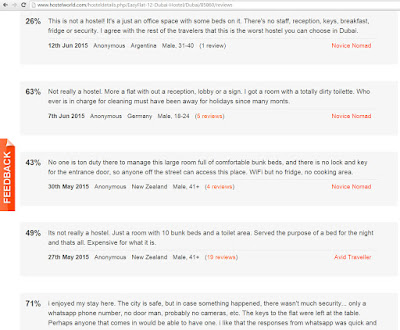 But scrolling down one page, here are the reviews right after the 71% one... 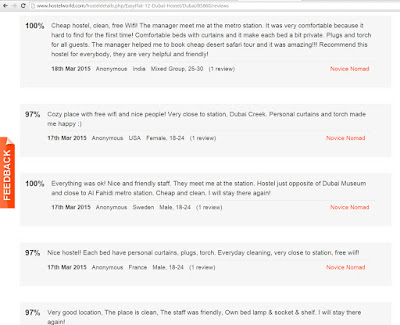 All in the 97-100% range! There is a series of 6 reviews like this, all from people who supposedly stayed at the hostel between March 15 and March 17, 2015, then it's back to the dismal reviews again, spread over a wider range of time.

Those six glowing reviews are from Novice Nomads with only one review each. That means they aren't even counted in my official tally of 39 verified fakes. (I can't prove they are fake, but they are certainly suspicious.)

Reading the authentic reviews is quite enlightening. The owner is said to have five apartments. He is regarded as a nice guy, but he is clearly in over his head.