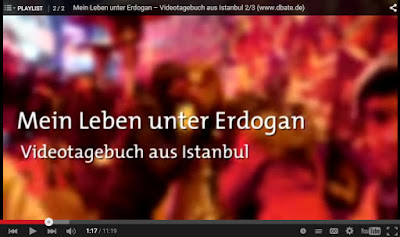 A least one of the videos I shot during the Istanbul Gezi Park protests in 2013 now appears in a German documentary available online.

The documentary, in German, is Mein Leben unter Erdogan (My Life Under Erdogan). The 3-part program consists mainly of Skype interviews with participants in the protest. I haven't located my own footage yet, but it is probably shots of the peaceful parts of the protest on June 6.

My original video was Turkish Woodstock, a 16-minute video taken June 6, 2015. I also experienced the joy of teargas on June 15 in this 9-minute video during the crackdown: Teargas for Everyone.

My still photos from the protest are in several albums, starting with Gezi Park. Other albums are found in my Istanbul Index.

I'm glad I could be of assistance to real journalists.

Posted by Glenn Campbell at 4:36 AM No comments: