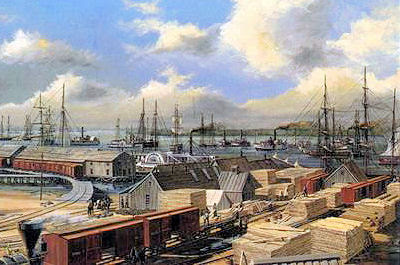 Every homeless dude needs a "Supply Base". That's a place to store the stuff he isn't using right now but will need later. Now you'll probably hear me rant on this blog about all the useless Stuff that home-dwellers collect around them, simply because they have the space to do so, but I am talking now about demonstrably useful stuff (lowercase) that can save you time and money by having available.

For example, if you have only one set of clothes, you're going to run into problems when it comes to washing them. Are you going to strip naked in the Laundromat as your clothes go through the cycle? I recommend against it for numerous reasons I won't get into here. If you had a second set of clothes then you could switch into them before washing the first set, and if you had several sets, you could stretch out the periods between washes, since washing is always a time-consuming and labor intensive process. It isn't vanity that dictates the larger wardrobe but practicality.

You can't be storing supplies like clothes at your campsite and still be free to move from site to site as conditions warrant. Instead, you need a Supply Base, and the most obvious kind is a self-service storage unit.

My Supply Base is a large storage unit in Las Vegas. I could rent a new one in San Diego, but for now I'll be cycling through Las Vegas often enough that the local unit isn't necessary.

Homeless people have been known to sleep in storage units, but I recommend against it. When you rent a storage unit, you always sign a contract that specifies that you can't live in the unit, and the penalty is death. That is, if you are caught sleeping in your unit, you'll probably be evicted immediately. The only problem with that is all your stuff is going to be evicted, too, and you'll have to find a new place for it on short order.

(If you want to sleep in a storage unit and feel you can get away with it, I suggest you rent a second unit at a totally different facility and use the unit only for sleeping. Then, if you are evicted, you haven't jeopardized your Supply Base.)

There is usually nothing in the contract that says you can't change clothes in the storage unit, and it doesn't usually limit the amount of time you can spend there during the day. There is no reason you can't set up a makeshift office there, although you have to be sensitive to management and how comfortable or creeped out they are about you.

When you have the choice between an exterior storage unit with doors that face outside and an interior unit (doors facing a corridor), you always want an interior unit. This gives you cover when accessing the unit in inclement weather, and it also holds down the dust and dirt that the wind blows into your unit.

Some managers have no objection to you tapping into the overhead light for power, but others do. If you can tap into power, you can surreptitiously charge your electronic devices and maybe even run a microwave or small fridge.

Having a Supply Base gives you the opportunity to preserve personal records and sentimental Stuff from previous lives that you just can't bear to part with. You can also preserve various supplies that you don't need now but might need later. For example, if you come across a cheap sleeping bag at a garage sale and you don't need it right away, you can store it at Supply Base until needed.

Homeowners also do this—saving screws, old clothes and pieces of string in the hopes that they might someday be useful, but since their space is much bigger than yours, they are more likely to get carried away. With a storage unit, you know exactly how much you are paying for the space, and this factors into your calculation of whether or not something should be saved.

You can store food at Supply Base, mainly things that are significantly cheaper when purchased in bulk. Perishables won't last forever there, but many fresh foods, like fruit, aren't as perishable as they seem. Oranges, for example, will often keep for a week or more without refrigeration.

As a work space, Supply Base isn't as comfortable as a nice cubbyhole in a college library, but you could still end up spending significant amounts of time in storage, at least managing your stuff. Again, the key thing is to not piss off management. The primary purpose of Supply Base is stable long-term storage, and nothing should be allowed to jeopardize that. 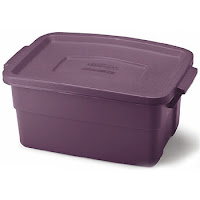 What would I do if I couldn't afford a storage unit? I would use large plastic storage tubs hidden in the wild. They are essentially weatherproof and can be purchased from the Evil Empire for about $6 each. I would half-bury one or more of them, cover the top with leaves, and no one would know they are there.

This brings up the subject of "caching," which is another way to store your stuff. Caching is leaving something in the wild where someone could theoretically find it and steal it, but they probably won't because they don't know it's there. When I leave a sleeping bag hidden in a bush, that's caching.

I would cache something when it is not terribly valuable and I can afford to lose it, or when the object to too bulky to comfortably carry around. If I hide a sleeping bag in the bushes, I am hoping it will still be there when I come back, but the one time out of 100 when it isn't, I am prepared to buy another.

I often cache things for a few hours just to avoid carrying them around. For example, when I am carrying groceries and don't have a car to put them in, I might just hide them behind a hedge for a few hours if I know I'll be coming back the same way. They could be stolen in the meantime, but probably won't be, and the risk is worth taking if it saves me a lot of effort.

Remember that in the suburban world, people rarely leave their cars, and these days children rarely even leave their video games to go out and play. Often, the only people who might stumble upon your stuff are landscapers, and they might not pass through for days.

I might also cache things I find lying around that I think might be useful in the future. For example, if I find a towel on the ground, I might roll it up and stash it behind a wall for possible use later. I'm like a little squirrel hiding nuts. Whatever I am hiding could be taken my someone, or I might forget about it altogether, but there is nothing lost in caching it.

Of course, caching can quickly get out of hand, as it does with the shopping cart homeless. They collect everything, on the very thin premise that it might someday be useful, and this Stuff goes into their nest and turns it into a giant trash heap.

This is a phenomenon I call "packratting" and it is a fascinating human trait. The homeless are not the only one who succumb to it. Suburban homeowner can also fall victim—only their trash heaps are better organized.

I'll talk more about the psychology of packratting in a future entry.
Posted by Glenn Campbell at 1:32 PM