The Psychology of Keeping Warm 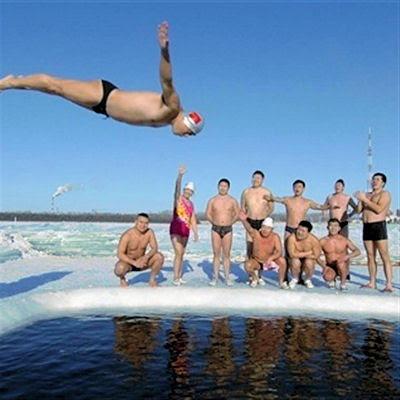 In an earlier entry, I talked about How to Keep Warm. The basic strategy is simple: keep dry and keep adding layers of clothing (or sleeping bags) until you are comfortable. This certainly works, but it doesn't tell the whole story about handling cold. It turns out your state of mind has a lot to do with how cold or warm you feel.

As animals go, humans are pretty naked. We have no fur, so we rely mainly on clothing to keep us warm. That doesn't mean our body has no resources, though. Humans have been living in cold regions for millenia, most of that time without central heating and without much more than loose animal skins to throw over themselves. Think of Eskimos living in igloos or American Indians in teepees. Yes, humans had fire, but you can't stoke a fire all night and still sleep, and fire doesn't help you when you're moving about.

To have survived, our bodies must have numerous physiological adaptations to the cold, most of which we rarely call upon in the modern world. An obvious one is shivering. If your core body temperature falls below a certain level, the body automatically ramps up metabolic activity. Other adaptations are less obvious. One is the restriction of blood flow to the skin and extremities. Others are various chemical processes to produce and retain heat inside the body.

You don't really know what your body can do until you test it. Unfortunately, most of us never really do. When we get a little chilly, we cry, "I'm cold!" and rush back inside.

Yet, there are still people who push the limits. Alpinists climb mountains in harsh conditions, sleeping on the ice with only the equipment they can carry with them. In the Himalayas, monks make long winter treks in the same thin robes they wear in summer. And every winter in northern climates damn fools cut holes in the ice and insist on swimming, if only for a few minutes. Far from being pained by the cold, these people seem to revel in it! The cold certainly isn't killing them. On the contrary, it seems to make them healthier!

What makes these cold adventurers different than those who fear and hate the cold? It's probably not their bodies. It's more likely a matter of attitude.

When you are depressed, for example, you probably won't take the cold very well. You'll huddle under blankets and turn the heat way up. On the other hand, if you are well-motivated and directed toward a mission—like mountain climbers are—you'll brush the cold aside until it becomes a real obstacle.

Part of the difference may be physiological. There could be a mysterious mind-over-body thing where your body responds better when your brain thinks it can do something. But the main reason cold-haters are cold and cold-lovers are comfortable is that cold lovers take control of their situation while cold haters just let things happen.

When people are depressed, poorly directed or regard themselves as victims, they become very passive. "Woe is me!" they say, instead of taking positive actions to address their problems. It is amazing how many people will complain about the cold rather than doing something simple like putting on a damn sweater!

Seriously, when someone claims to be cold, look at what they are wearing. In most cases, you'll see that their clothing isn't suited to the weather at hand. And they would rather complain about their discomfort than actually remedy it!

If you're cold all the time, try wearing some long thermal underwear. It's not very expensive (at Acme™), and because it is close to your skin, it works wonders for raising your body temperature. If that doesn't work, try two layers of long underwear. It's not rocket science! Yet, passive, poorly directed people won't take pro-active steps like this until they have already gone through a lot of pain.

At the other end of the spectrum are strongly motivated people who take control of whatever problem they face. They realize, "I'm getting cold. What do I need to do to address this problem?" They look around their environment for solutions, and they actually implement them!

Passive people tend to fall back on conventional solutions and are reluctant to try anything hidden or unusual (like long underwear). Active people are more creative, independent and opportunistic, taking advantage of whatever tools they find in the environment, even for purposes those tools weren't originally intended for. Passive people often to try to buy their way out of their problems -- say by ordering some sort of expensive mountaineer's jacket from L.L. Bean. Active people tend to solve problems quicker, cheaper and more effectively using the materials at hand. Their ingenuity usually works better than money because they are actually listening to their own senses and figuring out what the real problem is.

Another difference between passive and active people concerns tolerance of mild discomfort. When you're depressed or don't respect yourself, every unpleasant sensation is magnified. Even a little chill seems intolerable and triggers panic. Well-directed people will brush the chill aside. They analyze it and say, "It's no big thing; my body can handle it." The important thing to the well-directed people is pursuing the mission at hand; they are not going to let the cold or any other irritating sensation get in the way of it. Only when the irritation becomes an actual obstacle will they stop and address it.

Of course, the same principle applies to managing heat. Some people insist that they can't live without air conditioning as soon as the thermometer drifts a little above room temperature. Turns out, your body has a lot of built-in adaptations to heat as well as the cold (like expanding the sweat glands), but you have to turn these systems on through actual use. Construction workers manage to get things done in all kinds of weather through a combination of pro-active adaptation and just not giving a damn about whatever irritation gets in their way.

In a wider sense, this can apply to anything. Passive people see obstacles, while active people find solutions. Often, it's just a matter of getting off your hiney and doing something!

You can't make cold or heat go away, and there are limits to what your body can safely tolerate, but no matter what circumstances you are facing, you probably have a lot more negotiating power than you think you do. You just have to get it into your head that the problem is yours, not someone else's, and that you alone are going to solve it!
Posted by Glenn Campbell at 4:34 PM