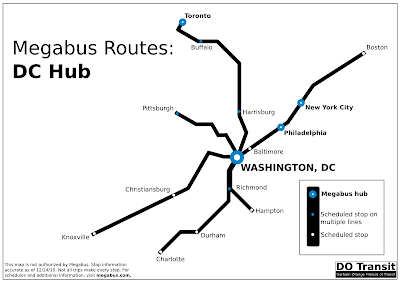 Sometimes even a homeless travelling dude has to lay back and chill for a while, so where does he do it without a home? It has to be someplace with mild weather where he can get by cheaply. It also has to be someplace well-connected with transportation options, especially if he doesn't know where he is going next. So where is the best place in North America to conduct such a-chill'n?

Transportation-wise, you might think that someplace in the center of the country would be best, like St. Louis or Kansas City, where you are equidistant from the coasts and where the cost of living is low. Turns out, however, that airfares to and from these places aren't cheap. Due to competitive pressures, it is usually cheaper to fly from, say, New York to L.A. than from St. Louis to L.A. Furthermore, although the cost of living may be low in the Heartland for people who live there, there aren't many options for the traveler, like hostels or cheap intercity buses.

You might think that New York City would be a good transportation hub, and it is, but transportation is just about all that New York offers. It's a jungle, painful to get in and out of and not the sort of place you can comfortably chill homelessly. Even the New York suburbs are dense and hard to navigate.

So where is the best hang-out for the homeless traveler? Suburban Washington, D.C.! I'm there right now, typing in the back seat of my cheap rental car in Alexandria, Virginia. Due to the vagaries of my business (gun for hire), I don't know exactly where I will be going next, and given that fact, this is the best place in the world to be.

I'm not interested in downtown Washington. I've already seen every tourist attraction. The suburbs are the "in" place for me, usually Virginia not far from Dulles or National airport. I rent a big full-size car and sleep in it. National airport is often a surprisingly cheap place to rent a car. This one, a spacious Impala, set me back $136/week, which is pretty cheap housing.

In D.C., I am blessed with the nation's best selection of transportation options. There are three airports: DCA, IAD and BWI, all accessible by public transit. Wherever I need to fly to, chances are one of those airports will offer a low fare.

D.C. is also a hub for Megabus, the new bus line the offering fares between major cities far less than Greyhound or Amtrak. I can get to New York or Philadelphia for $25 any day, which puts even more airports within my reach (PHL, EWR, JFK, LGA, RIC). Long haul routes are only about $45 to Boston, Toronto, Knoxville, Pittsburgh and Charlotte, and with connecting routes I can get as far as Florida, Minnesota or Texas. (See their system map.) Megabus can be cramped if every seat is booked, but one huge advantage is power sockets at every seat (more valuable to me than the wifi). Now, I can compute continuously from the moment I sit down.

Amtrak is an option if you can plan ahead, but their last-minute fares are way too high. If I wanted to go to New York today, I'd be paying $153 on Amtrak but still only $25-33 on Megabus. Megabus is really what made D.C. a hub for me. If I were a foreign backpacker touring the U.S., I would fly into whatever Eastern city had the best airfares than using Megabus to tour the East Coast. Cheaper than any sort of bus or rail pass.

The ambiance is nice in the D.C. suburbs. Here I have access to one of the two health club chains I belong to (Anytime Fitness), so showers and exercise are near at hand. Plenty of food options and other services. I can park almost anywhere to work or sleep; these suburbs are spacious enough that no one cares. I certainly have no concern for my safety in the Virginia suburbs. Demographics protect me from the rif-raff of the inner city.

Of course, there are plenty of Walmarts in Virginia for all my supply needs (clothing, camping supplies, etc.). These would be hard to come by in the dense suburbs of New York or Boston.

Only the summer sucks, when the humidity can be oppressive and sleeping in the car is a challenge. Cold is almost never a problem when sleeping in a car: You just close the windows and add more clothing and Walmart sleeping bags. Heat is the problem. To sleep in the car in the summer in Virginia, I would have to open all the windows for ventilation, and that means I have to be in a remote location with few mosquitoes. Good luck finding that! I would probably drive far out of D.C. in that case, perhaps to the shore where I can find some sea breeze.

D.C. also has hostels if I need them. (See the selection on Hostelworld.) If a rental car is prohibitively expensive or I need to catch an early morning bus, I may use a hostel for the night, generally for $25 to $40. Several are within walking distance of Union Station.

There is sightseeing here if I care to do it. While I have been to all the major D.C. attractions (my photos) there are always more obscure museums to explore. It seems that every organization wants to put some sort of museum or monument in Washington, and it would take years to visit them all.

Did I mention that it's our nation's capital? I may be jaded from overexposure, but Washington is a city that everyone should visit. Most of the government attractions are free. "Washington" looms so large in the news, that I think every human should have some direct experience with it.

But best to sleep in a rental car in the suburbs if you want an easy visit.
Posted by Glenn Campbell at 7:38 AM