While researching the previous entry, I stumbled upon my old friend, the Greyhound Discovery Pass™. It's been at least 25 years since I last used him but the price has hardly changed: $299 for 15 days of unlimited travel anywhere in the United States and Canada. No better travel deal can be found anywhere on the planet!

The best way to see America is still by car. The trouble with buses and trains is that they often whiz by places you want to explore and you can't take spontaneous excursions off the main route, but if I were a student traveler who wanted to see a lot of the country in a short time, this bus pass is the way to go. It will navigate you between hostels and provide backup accommodations where there aren't any.

Back in my youth, I bought several Greyhound bus passes, usually spending nearly the whole 15 days on the bus. Not your idea of Paradise? Well, if the whole country is virgin territory to you, each new city is exciting, and the adrenalin keeps you going. I used to plan out my my trips with an engineer's precision so as to take Greyhound for everything it was worth. You'd think with the past 25 years of airfare wars and fuel spikes, the old 'Hound would have been bitten the dust by now, but it keeps chugging along—aided, no doubt, by its monopoly position in most of the country. It can't be making much money on these bus passes or on cross-country trips, but it is probably doing well on short hauls where air travel doesn't work and it holds all the cards.

On Greyhound, you whiz by all the roadside attractions, but at least you get a good overview of the country, and you aren't distracted by driving. The front seat is the primo one if you can get it.

An Amtrak Railpass is still available ($389 for 15 days), but it isn't truly "unlimited" (only 8 segments allowed on the 15 day pass) and the routes and schedules have dwindled to the point where it is just the skeleton of a rail system. An Amtrak journey might make a good vacation, but it won't give you anywhere near as many options as bus. You also see tend to see more from the bus (especially if you can get that front seat), because buses travel more varied routes.

A Pet Peeve (if I may digress): Have you noticed that on all those travel shows about train travel, they are always showing the train FROM THE OUTSIDE? Here's the train crossing a dramatic canyon. Here it is skirting the coast. Now we see the train FROM THE AIR as it threads through the mountains. It makes the journey seem so epic and grand, but if you actually take a train trip, here's a clue: YOU'RE TRAPPED ON THE TRAIN! You don't see all those sweeping vistas. You can either look out one side or the other, often through dirty glass. Short train trips can be fun, but for long hauls, it's just another form of transportation: It either gets you there at a reasonable price or it doesn't. If you want romance, buy the video.

In Europe, the old standby used to be the Eurail Pass. Twenty years ago, it was the way to go for North American students on a budget, but its luster has faded. It has gotten too expensive while the number of low-price alternatives has expanded. Today, the 15-day Eurail pass is roughly $449 for "youth" under 26 and $689 for adults. That's train robbery considering the availability of dirt-cheap air and bus services in Europe. Eurolines™ offers all-Europe bus passes for considerably less than the Eurail Pass, but you might be better to just go point-to-point, shopping the internet for cheap air and bus fares and buying them as needed. That gives you more flexibility, lets you change modes (road-rail-air) and allows you to dally in each city for as long as you like.

If I was traveling in Europe for two weeks or more, that's probably what I would do. I would reserve my first hostel at my entry city, stay there as long as it interested me, then do on-line research from there to decide what my next leg should be. (My first online stop would be RyanAir™ to see what ridiculously low airfares they are offering.) Since my own budget is microscopic and I have already seen the main tourist traps, my own journey is likely to be dictated by price. To get to the countryside from a gateway city, there are often some government-subsidized bus routes that are quite cheap, and I have only begun to explore those.

Britain is atrocious! The Eurail Pass doesn't work there, and rail prices are astronomical, enough to blow your budget in an instant. Even a single ride on the Tube will set you back a king's ransom. The only affordable options there are bus and air.

Or, hey, how about a bicycle! I'm serious! In nearly every tourist center, you can find reasonably priced bike rentals, and a bike can give you an angle on a city that you'd never get to on foot or public transit. It's almost better than a car because there is no traffic or parking problems. The $15-20/day might be well worth it!

I've rented bikes for day trips from the hostel, but someday I might try a multi-day trip. It would be a challenge. If you just get on a bike in some foreign city and start peddling, with minimal gear, where would you sleep? That would push Free Sleeping to the limit! 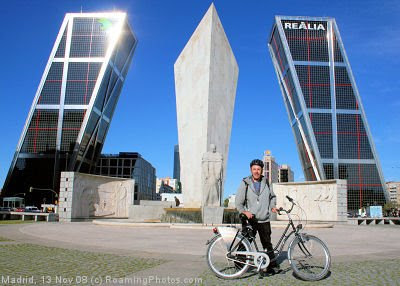 Yours truly in Madrid.
Posted by Glenn Campbell at 2:16 PM