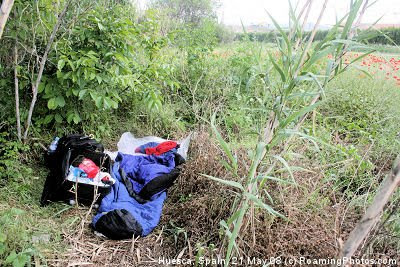 In May 2008 (before I started this blog), I had a chance to practice my Free Sleeping skills in Europe. I was visiting Barcelona for several days. In the city itself, I was staying in a hostel for about $25/night, which served my needs fine, but I also took an overnight trip into the countryside, where there were no hostels. Being that the weather was fine, I decided to just wing it. I had a sleeping bag with me, so I figured I would work something out.

I don't speak Spanish, and I had never been to the region I was visited, Aragon, so there was an element of excitement to it. I had no internet access during the bus ride (Heaven forbid!) and had no paper maps or guidebooks, so I couldn't scan ahead to see where I might land. It was a little like traveling in unknown lands during the Middle Ages: I would have to work it out as I went along. Western Europe is pretty civilized these days, and I knew I wouldn't be set upon by bandits. The worst that could happen is that I wouldn't get a good night's sleep.

Here is my photo album of my bus trip to Aragon. As you can see, it is a relatively dry land, a lot like Southern California in climate. I was riding on a relatively cheap, government subsidized motor coach from Barcelona, and the bus route ended at Huesca, so I figured that was where I would spend the night. I knew nothing about Huesca, except that it had a population of about 50,000. Having no maps or tourist info, I would have to learn the layout of the place on the fly. (Actually, that can be a very pleasant way to travel! Sometimes, we drown ourselves in too much information.) As the bus approached the city, I took careful note of the landscape. I was looking for a patch of overgrown land within walking distance of the bus station in the city center.

European towns and cities are extremely dense in the center, which arises from their medieval roots. Without transportation other than foot, early residents would cluster together in a thick mass with only narrow streets between them. There is no wild greenery near the center of the average European city so there would be little chance of Free Sleeping in the town itself. However, in medium-size cities like this, the countryside can be very close, often within walking distance. Away from the major metropolises, there are fields and hills where it is usually easy to find a nook to sleep in.

As we approached Huesca, the bus crossed a bridge over the railroad tracks. On one side, looking up the tracks, was the dense city center, but in the other direction were open fields and farms. I knew, then, that I had a strategy: I would find the train station and follow the railroad tracks out of town, under the bridge I was crossing, until I found enough greenery to sleep in.

It was late afternoon when the bus let me off at the Huesca train station (which happened to be the terminus for the bus). I took my backpack and my small rolling suitcase and headed down a road running parallel to the railroad tracks. Sure enough, less than a mile from the train station and just after the bridge, I found what I was looking for: a piece of overgrown field, about 100 feet wide, between the road and a ploughed farm field. It wasn't much, but the grass was tall enough here to hide me from the road, at least at night. I left my suitcase here (containing mainly my sleeping bag) and I walked back to Huesca to tour the old part of the city.

When I came back after dark, my suitcase was just where I left it. I didn't have any ground cover, so I used some newspapers I filtched from the trash at the train station. The matted grass underneath me provided adequate padding. (See Requirements of Sleep.) For a pillow, I used some rolled up clothing.

My next problem, though, was the anticipated Attack of the Mosquitoes. The only camping gear I had with me was a lightweight mummy-style sleeping bag. This would get me through the relatively warm night (probably in the 60s). However, I had no defense against mosquitoes (ubiquitious the world over). I had no tent, no mosquito netting and no repellent. The ground was damp and there was an overgrown stream a few feet away, which seemed like a perfect breeding ground for the critters. Mosquitoes may be small, but they have the power to thoroughly disrupt your night. They are the main reason for using a tent in the summer. I expected the worst, but I had nothing to lose by trying. At least I might get a little sleep between attacks.

I can survive a night with little or no sleep. I've done it before, and as long it is bracketed by solid sleep the night before and the night after, it doesn't usually disrupt my travels. The big problem of not sleeping is just passing the time. It's an exquisite hell to not be able to sleep and not be able to go anywhere either because the sun hasn't come up. Your brain is so frazzled that you can't get anything done on the computer, so you don't have any choice but just watch the clock tick by. Just one or two mosquitoes buzzing around your head will do this to you.

Turns out, there wasn't a problem at all. I lucked out! Not a single mosquito visited me that night (I'm not sure why.), and I had a blissful night's sleep I remember nothing about. I awoke fully rested just after dawn. I packed my sleeping bag back into the suitcase, wheeled it back to the train station and continued my journey. Cost of my night in Huesca: €0 ($0).

What did I learn from the experience?
Other than than, I feel confident that I can land in any European city in the summer with just a sleeping bag and get by (as long as there's no rain in the forecast). It's an adventure. It gets you back to your medieval roots where people walked from town to town on foot and seemed to make do.

Hostels are still the way to go when wandering Europe, but I'll gladly camp again if the opportunity arises.
Posted by Glenn Campbell at 1:43 PM