On the Road: Phoenix to Richmond 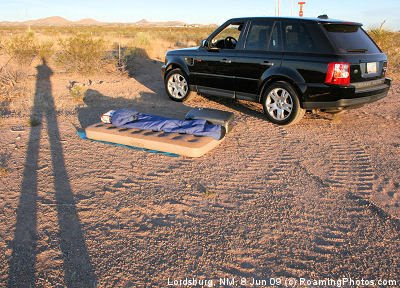 As a deliberately homeless dude, one of the things I do to make ends meet is drive other people's cars across the country. This is one thing I can do right now that most people can't. Since I am a laid off airline employee who can still fly for free, it costs me nothing to get to where the car is and to get away once the drive is done. This gives me the ability to undercut the major car transport companies.

I also keep the operation afloat by staying in motels only rarely — typically only at the beginning or end of each gig. I let my clients fill the car with whatever they want, so I do not always have the back seat to sleep in. Instead, I usually camp, and for this purpose, I bring a tent, sleeping bag, air mattress and air pump with me.

The desert in the summer is the best. No matter how hot it gets during the day, the night is always comfortable, and there are rarely any insects or rain to deal with. I just put down my air mattress (usually on a tarp for ground cover), pump it up and I'm home! In the desert, there is certainly plenty of open land to do it on, and if the land happens to be public, camping is 100% legal. (If the land isn't public and you are there only at night, nobody is likely to notice you or care anyway.)

Above is my campsite nears Lordsburg, New Mexico, three nights ago. It may not be pretty to look at, but in terms of a comfortable sleeping experience, it was a dream! In spite of the desert's reputation as a harsh place, there is really nothing out here to hurt you, and the weather rarely interferes.

Things change rapidly, however, when you come east. As soon as I passed from Texas into Arkansas, I moved from desert to tropical rainforest. That's the best description for the whole eastern half of the country from May through September. Here you usually have vicious mosquitoes and frequent rain. A tent is essential, and camping gets a whole lot more complicated.

Last night I camped off I-40 near Brinkley, Arkansas. As usual, I selected my campsite at dusk, while I could still see, and I thought I found a good one. It was a concrete pad from a demolished building at a remote rural exit. There was virtually no chance of anyone stumbling upon me. It took me a little longer than usual to set up the tent due to some faulty equipment, but soon I was safely installed inside, on my air mattress, protected from bugs.

The only trouble was, while I was erecting the tent I got about a dozen mosquito bites, and the itching drove me crazy! I took my magic pills - enteric-coated aspirin - but they helped only slightly, and it took me at least three hours to get to sleep. Then, not long after I began to sleep well, thunder and lightning woke me and told me a storm was imminent. My little tent really wasn't adequate for a heavy thunderstorm, and I didn't want to deal with wet equipment in the morning, so I broke camp and continued my drive at about 3am.

This camping experience was pretty much a lost cause. I pride myself in being able to sleep anywhere, and I ended up sleeping sitting upright in the drivers seat of the car. This sounds uncomfortable, but it actually worked out well, better than the tent. In practical terms, it was like sleeping on a transatlantic flight - but in a First Class seat, not coach. Wearing my sleep mask, I slept soundly for five hours, making up for my sleep deficit.

The only problem now is that I have lost about 3-4 hours of driving time (and another hour writing this entry). Today, I have to put on a lot of miles, with few stops, to try to meet my schedule.

This is all to say that the homeless life isn't entirely idyllic. especially on the humid East. You are often at the mercy of the elements and nature. Most people I know couldn't tolerate the rough time I had last night. They would be complaining, Big Time: "Why can't we go to a motel?"

To me, the $40+ just isn't worth it. You got to find an affordable motel first, then check in, unpack, etc. Once last night's tenting experience failed, there wasn't much that a motel could do for me except delay me even further. Most of the time, camping goes fine, and if you play the odds, it's still a good deal. There are occasional bad nights, but the good nights make up for them.

It's not just the expense of the motel that's the issue, but also being able to sleep wherever you are, while getting in and out of sleep mode quickly. Generally speaking, it is a lot easier to find a camping spot than to find a cheap motel, and once you fall asleep, your body can't really tell the difference.

It's just that a humid environment can be difficult: rain, mosquitoes, wet clothes that won't dry, sticky nights that don't get any cooler than day. I'll take the desert any day!
Posted by Glenn Campbell at 8:15 AM