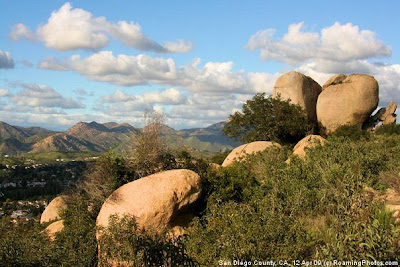 Through some clever online detective work, a reader reports that he has found Camp Site Beta - the area of native land in San Diego County where I have been sleeping off and on for almost four months (when I'm not traveling elsewhere). Based on the clues in previous blog entries and photo albums, he found the location of my campsite in a couple of hours of online research. He sent me the lat./long. coordinates, and he is dead-on accurate!

He is worried, however, that if he could find it, others can to:

I do have some concerns, however, about those clues being misused by others reading your blog. It seemed way too easy for me to find your location and I'm sure others, with more experience in wayfinding, topographic maps and navigation, will find it as well. Those others may not be the kind of people you would want wandering around your bedroom under the stars. I have known homeless guys, especially former military, who were very smart and resourceful especially about things like camping and navigation. Some of them were also unstable and could be violent. Anyone searching Google for "homeless" and "San Diego" now will come across your blog and could potentially find your camp site with just a couple of hours of online searching.

Naw, no worries! I realized that I was giving away clues when I published those photos and that someone with enough time and smarts could probably figure it out, but that's a lot different than me directly saying where it is. To begin with, there's those two hours of research someone has to do: That's the first price of admission. Most people simply don't have the time or motivation. Sure, a Special Forces guy could follow the clues and kill me in my sleep, but, Christ!, a Special Forces guy could probably find me and kill me anywhere. The question is, Why would he want to? My known enemy list dropped to zero after my divorce was finalized.

I also recognized from the beginning that camping on this land was probably illegal. In an urban area like this, it would have to be. But "legal" or "illegal" doesn't mean a lot in practical terms. We all do illegal things every day, like driving one MPH above the speed limit, but that doesn't necessarily mean we are going to be caught and prosecuted. To attract enforcement, an offense has to rise to the level of a visible public nuisance or public safety issue; otherwise, police have better things to do.

I direct the reader to my earlier entry, Free Sleeping and the Law. What is law anyway? It is a written rule to address some past social problem. There are "No Camping" regulations on the books because at some time in the past there were abuses. If you formally "let" someone camp on community property, they are likely to stay there indefinitely and make a mess of the place. When a problem becomes visible, the law is a tool police can use to address it. That doesn't mean, though, that law enforcement is going to actively search for illegal campers or enforce the law when there isn't a visible problem. It's like driving 1 MPH above the speed limit: No one really cares.

Law always comes down to two components: written law and actual enforcement. One isn't meaningful without the other. Legislators can put anything they want into a written law, but they rarely give law enforcement any addition funds to implement it. It sounds ironic, but no law can force police to enforce the law. They still follow their own selective agenda, and busting invisible campers isn't high on it.

Most people are good citizens, and if you tell them something is illegal or put up a sign to that effect, they will obey. To them, the law is a commandment issued by God, not by buffoons in the legislature. Only miscreants like myself and your average lawyer are going to look beyond the statement of law and ask, "But what does this really mean in practice?"

In practice, a "No camping" law really only mean, "Don't get caught camping." In other words, don't make a nuisance of yourself to the point where someone complains and the police have no choice but step in. Life is like that in a lot of areas. If you stand up and say, "Hey, look at me, I'm breaking the law!" you're going to attract attention, but if you quietly do what you want without making many ripples, you can get away with a lot.

And I don't mean "getting away with" in an irresponsible sense. I am a very responsible camper. I go to Camp Site Beta only after dark, sleep, then leave around dawn. I am light on the land and leave no visible signs of my presence. I carry out all of my trash.

The law is a blunt instrument that can't make accommodations for subtle cases like mine, so as long as enforcement gives me wiggle room, I will make my own choices about right and wrong.

In practical terms, I am also protected by all the thousands of visible mentally ill homeless people in San Diego County. These are the ones who make the huge messes wherever they camp. Before any authority is going to hunt me down in my secret camping spot, a stiff quarter-mile climb up a hillside, they first have to address the homeless in plain view camped on virtually every block of vacant land between here and downtown. But the law can't touch them! You can't fine someone who has no money, and you can't throw the homeless in jail unless you want your jails to become your prohibitively expensive homeless shelters. So the enforcement component of the law just leaves them alone. That means that as long as I watch my manners and remain invisible, they will leave me alone, too.

But what if this blog catches on and inspires thousands to abandon their homes and follow the glorious Free Sleeping lifestyle? And what if they all decide to live at Camp Site Beta? Won't that attract enforcement and spoil the site for me and everyone else?

That's the age-old argument used by mothers everywhere: "What if everyone decided to do what you're doing? Where would we be then?" The fact is, if you live life by your own rules, the chances of colliding with someone else doing the same thing are depressingly low, even with an audience of millions.

In past lives, I have had a lot of experience with publicity, and I find there's a huge attenuation effect between consuming a media product and actually taking action in the real world. For example, I recently appeared in a TV documentary about Area 51. Six million people saw the show, but only a few hundred hit my related website because of it. At most, I got only about 1000 fleeting hits on my website from those 6,000,000 dimwit viewers. Of those 1000, maybe 2 people actively contacted me as a direct result of the show.

So I have no great fear that this blog, which gets a relatively trivial number of hits each day, is ever going to take off to the point where it changes the actual homeless dynamic in this country, let alone at Camp Site Beta. Only Oprah could give me those kind of numbers, and Oprah isn't returning my calls.