My Own Private Island (Free Sleeping in Maine) 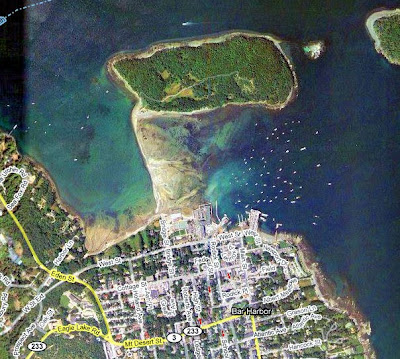 This past Labor Day weekend, I spent four days living on my own private island in Maine. I hadn't intended so much luxury on my $15/day budget, but that's how things worked out.

I chose to head to Bar Harbor (Acadia National Park) for the long weekend mainly to get some work done. I had a book to read and writing I wanted to do. Normally, I would go to San Diego for this, but I was already on the East Coast and had an appointment in Boston after the holiday, so the long flight to San Diego didn't make sense. I needed another place I could work in peace for a few days. Mount Desert Island wouldn't seem like the first choice, since it was a pricey tourist haven with no university library, but the town of Bar Harbor had enough to make up for it: (1) a FREE local bus system, including service to the airport, (2) FREE Wifi in the town's two main parks, (3) FREE A/C power on almost every lamppost in those parks, and (4) plenty of wild woods for FREE camping. The weather forecast was also as nearly perfect as you can get in Maine: daytime highs in the 70s with no chance of rain.

I had visited Bar Harbor the year before (and several times as a kid), so I knew there were virtually unlimited areas to camp. Camping without permission was no doubt illegal virtually everywhere (given the high density of tourists), but in practice it's easy and harmless. With so much forested land, there are always places you can hide a small tent. Only a car would give you away, and I had none.

I prepared from my trip by purchasing my lodging at a Sports Authority™ store in Boston... 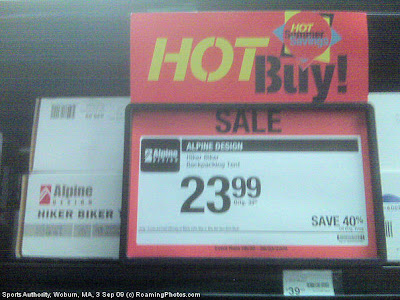 I needed a new tent to replace one I had jettisoned elsewhere. I consider these $25 tents disposable. I'll use one until it breaks or is inconvenient to haul around. Then when I need another, I pick it up at one of the mega sporting goods stores, where there's almost always a $20-30 tent on sale. (Big Five Sporting Goods™ is another good source.) In this case, the only reason I needed a tent was for protection from the bugs, which Maine is notorious for.

I landed in Maine with just the basics: my computer and camera in my backpack and my new tent and a mummy sleeping bag in my satchel. I flew into the local airport in the evening and took the free bus to Bar Harbor downtown. When I got there, it was dusk, and I immediately started thinking about where I would bivouac for the night. My default plan was to simply walk out of town until I found woods to camp in, but I soon as looked out at the harbor I got a better idea. 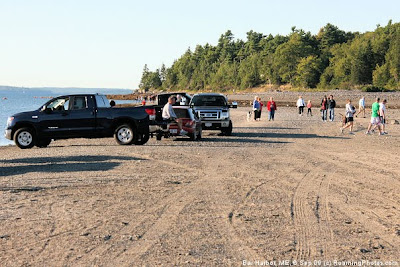 There was a causeway to a forested island across the harbor. (The causeway was apparently the "Bar" in "Bar Harbor".) Great! I would blend in with the other tourists, cross the causeway and camp on the island, at least for the night.

As I was walking across, I figured that the causeway was tidal, since there was nothing growing on it. I knew it was probably covered with water at high tide. However, I didn't recognize at the time just how tidal it was.

Here was the first resident I met on the island.... 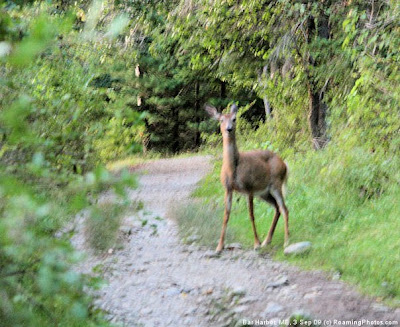 There were no humans. The island was quite large (68 acres I later learned), and I figured I would avoid detection by going substantially off the main trail and camping there. My rudimentary tracking skills told me there were deer crisscrossing the island but that humans stayed primary on the main trail. 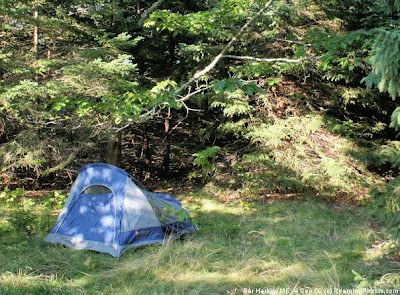 I pitched my $25 tent on the edge of a natural meadow and tucked myself in for the night. It was curious to be the only human on the island. I could hear several deer passing noisily a few yards from my tent. (Deer are not the silent creatures you might suppose. They sounded like they were loudly blowing their noses.) Nothing about being here spooked me until I thought a bit more about the deer.

Lyme disease! It's the scourge of New England. The disease is transmitted not by deer themselves but by the deer tick. If you get bitten by one, you could fall into a Sleeping Beauty lethargy that can be life-threatening. I got a little concerned until I googled it up on my BlackBerry. It turns out Lyme disease is not a major problem in Acadia National Park, although officials still warn visitors about it. The first night I slathered myself with bug repellent (which I find repellent myself), but after that I simply inspected my pants for ticks each time I walked through the grass to my tent. I found none, and in fact no bugs at all bit me whilst in Maine.

There was a tide chart posted at the start of the main trail, so I knew when the next low tide would be, and I guessed I would have three hours on either side of the low to enter and exit the island. In the morning, I took my time waking up. I thought my tent was secure from possible discovery, so I left it in place, then I wandered down to the causeway.

There wasn't any! I had missed my tidal window. It turns out I could only count on about 2 hours of dry land on either side of the tide. The tidal swings in Maine can be huge—in this case about 11 feet, which had thrown off my judgment the night before. I was now trapped on the island for another eight hours!

Fortunately, I had a book to read and enough food and drink to get by for the day. I wanted to read the book, but now nature was forcing me to. I lay in my tent all day reading. In the late afternoon, I started to hear human voices on the trail just about two hours before the low. I still had a few chapters left to read, however, so I did not depart from the island until just after the low. I had things I needed to do in Bar Harbor, including recharging my devices, buying some food and uploading some photos. By the time I got back to the causeway, it was well after dark and the causeway was already partially flooded.

I calculated that I had no option but to cross it anyway, since all of my camping gear was on the island and there was no way I could afford legitimate lodging in this town. I walked across the dry part of the causeway, and when I got to the water, I just kept walking. (I was prepared to sacrifice of another pair of $12 Wal-Mart sneakers.) I had to use dead reckoning and memory to try to stay on the causeway in the darkness until I got to the island. (Kind of exciting, actually!) When I reached dry land of the island, at least I had the satisfaction of knowing I was alone here.

The island is called Bar Island and it is part of Acadia National Park. About a dozen tourists a day venture beyond the causeway and follow a short trail to the high point of the island, where they can view Bar Harbor. Camping is no doubt prohibited here, but there were no signs saying that. One sign called this a "fee area", and I hadn't purchased a regular park pass, but I wasn't worried about that either. The only way I would be caught was if there was a park ranger inspecting bags on the causeway or if a ranger thoroughly patrolled the island during the four-hour window. Both possibilities seemed highly unlikely. As in most national parks, rangers patrol where there are people, not where there aren't.

Having got into the rhythm of the island, I stayed two more nights there. In the morning, I crossed to the town, spent 12-14 hours using their free power and internet services, then crossed back in the evening. (A fourth night, I camped near the airport so I could take an early flight out.) I shopped at the small local grocery store every day, and my only other expense was $13 for a lawn chair, which I sat on at a park while I computed.

After four nights in the woods, I probably smelled like a moose, but I got a lot of work done. I could have visited Acadia National Park on the free bus system, but I had done it before. Instead, I read a whole book and even started writing one of my own. (I wrote this sample book chapter in a single day as I sat in a seafront park.)

Unlike San Diego, I don't think I could have stayed her indefinitely, partly because of the risk of discovery but mainly due to Maine's fickle weather. Still, I got my money's worth out of Bar Harbor and have nothing to complain about.


Here are my photos from Bar Harbor from both this visit and my earlier one.