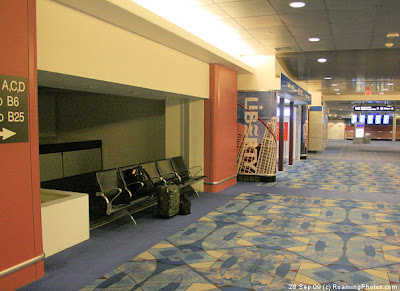 Last night, after renting an SUV in Las Vegas for $23, I turned in the car and started heading to the East Coast. The red-eye flight I had hoped to take was overbooked, so I found myself stranded overnight at an airport somewhere in the American Southwest. I was safely inside security (having had a boarding pass for the overbooked flight), so it was logical for me to sleep there and take a better flight east in the morning. (See How to Sleep in an Airport.)

Unfortunately, all of the airport seating had fixed armrests as shown above. I can sleep on these seats if necessary (by wrapping myself around an armrest in the fetal position), but it's not my best sleep. I can also sleep on the floor if I need to, but in open areas it makes me feel too vulnerable and obvious.

I cased out the concourse and found no great sleeping sites until I stumbled upon the scene above. It's the same fix-armrest seating, but look again! What's that behind the seating? 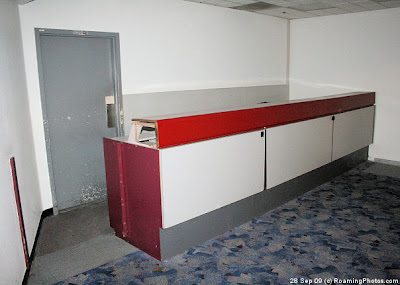 It's an abandoned customer service desk! As airlines have cut back in the past year, you find a fair number of these unused facilities. I poked around and found that the door was locked, and there were no computers or other equipment in the desks.

What a perfect campsite! 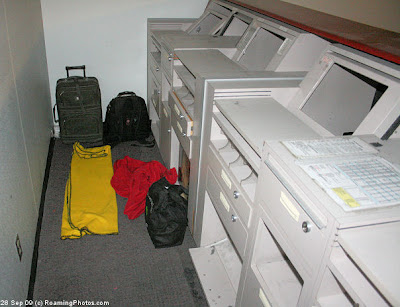 I felt much better sleeping on this floor than out in the open. (Privacy is nice when you can get it!) No one was going to notice me unless they were as curious as I am, and the small amount of trash on the floor indicated that the cleaners don't come back here often. If security found me, the worst they would do is ask me to move—and there's virtually no security inside security anyway!

I had two blankets with me. One of them I folded up and used as a mattress. It turns out this was just enough padding to allow me to sleep soundly. And I did! I got a solid 7 hours of sleep! (I credit my rigorous physical conditioning.) I woke on my own schedule and boarded the eastbound flight I intended—flying First Class, no less.

Good things come to those who are adaptable!
Posted by Glenn Campbell at 6:41 AM