How to Sleep at an Airport 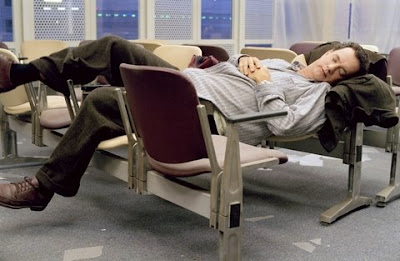 Tom Hanks in the movie The Terminal demonstrates how NOT to sleep in an airport. (He needs to work "with" the furniture, not against it.)
The worst torture to most air travelers is to be forced to spend the night in an airport, due to bad weather, canceled flights, etc. I see it as enormous good fortune! Airports are safe, dry, well-heated places where you can often sleep comfortably if you are reasonably flexible and prepared. If you find yourself without affordable lodging, you can sometimes even "arrange" to be stranded at an airport—say, by not leaving security after your plane lands.

Many (but not all) major U.S. airports are open all night, and on most nights there are passengers sleeping at the gates. It's a fact of life that flights get canceled or overbooked, and often the airline cannot accommodate the affected passengers until morning. Airports usually accept this and do not harass anyone sleeping inside security. Sometimes they even hand out pillows and blankets!

As an airline industry traveler flying stand-by, I am often stranded when the flight I had intended to board is full and I can't get on. I can also DECIDE to strand myself at an airport if that is the best accommodations available. You can't argue with the price: $0 per night!

(In a separate entry, Where to Sleep in an Airport, I review some specific airports. In this entry, I discuss equipment and techniques.)

Here is the most important equipment to have with you…

2) A light blanket. Even warm clothing is not enough to keep you warm at night at room temperature. You will also need at least one light blanket—like those on airplanes. I find that one such blanket is sufficient and two make me positively cozy. Perhaps you can "borrow" a blanket from the plane or even ask for one from the airline customer service agents on the ground.

3) A knit cap. At night, most heat escapes through your head. Whether or not you have a full head of hair, a cheap winter-style knit cap could greatly decrease heat loss and improve comfort. (Being follicly-challenged myself, I find it essential.)

4) Foam earplugs. In most airports, the music and recorded safety announcements continue all night, and sometimes CNN is blaring at you from monitors at every gate. Earplugs cut down this audible clutter and may even protect your hearing from the constant noise.

5) A sleep mask. In an airport terminal, the bright fluorescent lighting is on all night, and it penetrates right through your eyelids. I avoid this with an eye mask (less than $5 in the travel section of the Evil Mega Mart) or by pulling my knit cap down over my eyes.

6) A travel pillow is nice, but not essential. If you don't have one, there is usually some article of clothing you can roll up and use as a pillow.

7) Toothbrush and toothpaste. Travel is no excuse not to attend to dental hygiene. Always carry your toothbrush and a small tube of toothpaste in your carry-on bag. (In the U.S., the toothpaste has to be 3 ounces or less to pass through security.)

If you have all of the above equipment, how do you actually "sleep" in an airport? You just lie down and do it! Preferably you choose a location that is fairly quiet and discreet, but you don't have to hide. Usually, this is going to be the waiting area at one of the gates.

The accommodations differ from airport to airport. The most significant difference between them is the seating: "armrests" or "no armrests." If all bench seats in the airport have fixed arm rests between each seat, it is impossible to lie down flat on them. When the seating has no arm rests, then you can stretch out full length and sometimes sleep as soundly as you would at home.

In most airports, you can find at least some seating without arm rests, but you may have to search for them. For example, in Philadelphia most seating in the "A" concourse has armrests, but most seating in the "B" and "C" concourses does not. In an airport like this where all the terminals are connected, you can wander around until you find a neighborhood that suits you.

A few other airports have armrests on 100% of their seating, which makes sleep difficult but not impossible. Seating with armrests looks like this… 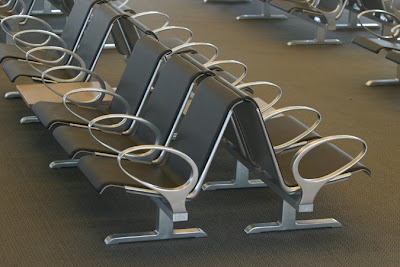 It looks impossible to sleep on seats like this, but I have managed it! One requirement of sound sleep is that your whole body must lie at about the same level. Although you don't have to lie "flat", your feet have to be at about the same level as your head to prevent blood pooling in them. If you are limber, you can sleep on seats like these by forming your body around an armrest in a fetal position. It doesn't sound like it would work, but it does! Your butt is hanging over thin air, but the rest of your weight is on the seats and keeps you from falling. It takes some getting used to, but I have spent a number of sound nights in this position, shamelessly defeating the purpose of the armrests.

Another option is to sleep on the floor. This is not nearly as comfortable as a padded seat, but on a carpeted floor, it is often passable. Finally, you can try to sleep upright on the seats, like you were sitting on an airplane. At least you'll have more space than you would in Economy Class!

If you are sleeping at a gate, check the departure board to see when the first morning flight is leaving from that gate. Later is better, since it gives you more time before the crowds arrive in the morning. You can also look out the windows of the gate to see if a plane is parked there overnight. If there is no plane present, there unlikely to be an early morning departure.

Personal security isn't much of an issue inside the secure (or "sterile") area of the terminal. Everyone there has already passed through the screening process and has a legitimate reason for being there. You should keep your personal belongings close at hand, but you don't need to be paranoid. Your most valuable possessions, like your passport and electronics should be stored under your seat in such a way that someone would have to wake you in order to steal them.

Visible security within the sterile area is remarkably lax. You would think in the post-9/11 world, security officers would be everywhere, but they're mainly at the security checkpoint. Once you're in, you're in, and no one has ever asked me for a boarding pass or identification after entering. (This is true for U.S. airports, although I can't speak for overseas ones.) The only time an airport employee has ever woken me up was once in Philadelphia—to give me a pillow and blanket!

When getting off a flight, however, you can simply decline to leave security. This only works, of course, if the terminal is open all night. (You can find out by asking a customer service agent.) If you have luggage heading for the carousel, it will be held for you. (You might get a call from the baggage service office, but you just tell them you are delayed and will be back for the bag in the morning.)

Airport food is usually horrendously priced, but your aim isn't to live at the airport, only to squeeze a night's sleep out of it. Water and maybe a snack are all you need. Once you are rested and refreshed, you can head out into the world.

A few overseas airports actually have hotels or simple sleeping quarters available inside the sterile area. Singapore, for example, has free recliners available and Amsterdam has low-cost "sleeping rooms" (or did when I last passed through 10+ years ago). The accommodations and security arrangements differ by airport. You should check the airport's website for clues, but you usually have to actually visit to know what is available. (Some international airports may send you directly to customs and then to the outside world.)

Outside the sterile area, you will often find people sleeping in the baggage claim area or in various indoor non-secure areas of the terminal. The wisdom and acceptability of this varies greatly from place to place. After I found all Dublin hostels full, I spent the night with dozens of other travelers in the public area of the airport. I've also stayed several times in the baggage claim area of the Charlotte (N.C.) airport, where the sterile area closes at night. Whether you can get away with this often depends on how far the airport is from the city and whether everyday vagrants might abuse the privilege. Outside security, there is a greater likelihood that someone will wake you up and ask for credentials. If you have ticket for a early morning flight, that might sufficient to let you spend the night outside security. (Again, no one has ever asked me for credentials or a ticket when I slept at an airport.) There is also a slightly greater chance of theft outside security, since anyone can walk in off the street. Still, the public areas are usually well-lit and well-patrolled, and I don't feel that safety is an issue at any modern airport.

When the choice is a finding and paying for a $100+ hotel room or lingering in the airport for the night for $0, the airport can often be an acceptable alternative. The skill can also be handy if your flight is oversold and the airline asks for volunteers to give up their seats in exchange for a future free ticket.

It's just one more weapon in the arsenal of the Free Sleeper.

For reviews of airports I have personally slept in, see a separate entry: Where to Sleep in an Airport.

Wow! There's a website dedicated to sleeping in airports: sleepinginairports.com