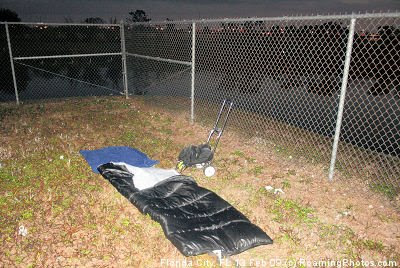 The ultimate way to test a survivalist is to drop him off in the wilderness with only a hunting knife and see if he can stay alive. I do pretty much the same thing but in an urban environment. As a furloughed airline employee flying standby, I often find myself spending the night in cities I never intended to visit with little more than the clothes on my back and $20 in my pocket. My test is to see if I can sleep safely and comfortably in these places using the limited resources I have.

I faced just such a test about three weeks ago when I left San Diego for something resembling "work" in Miami. I had to get to the Miami airport to pick up a car to drive a few states north. The only trouble was this was February school vacation week, the peak travel time to South Florida, and all of the flights there were fully booked. Getting into Florida seemed darn near impossible.

Instead of a hunting knife (which would never pass airport security), I travel with a backpack full of electronic equipment, assuring me some sort of connection to the internet. In my current "adaptively homeless" lifestyle, internet access can often mean the difference between success (a good night's sleep) and failure (a miserable sleepless night).

First, I had access to my airline's load factors, so I could determine just how full the flights were. All flights to Florida were fully booked and most were also "overbooked," meaning more seats were sold than were actually available on the plane. Airlines routinely overbook flights on the assumption that some passengers won't show up, and if everyone actually checks in, they have to ask for volunteers to give up their seats. My chances of getting on an overbooked flight were next to nil, especially if other employees were waiting to fly, but if a flight was merely "booked" (the same number of reservations as seats), I might have a chance, since some passengers might not check in.

I had a choice of four airports to land at, traveling by ground to Miami if necessary, but only one destination stood a chance: a commuter flight to Key West. I listed myself for the flight, went to the gate, and got on!

A couple of hours later, I was in beautiful Key West, the "Conch Republic," the southernmost point in the continental U.S. and the nearest thing to a tropical island this side of Havana. This was February, but it was HOT in Key West, at least 80 degrees and humid. The only little problem now was getting to Miami.

Furthermore, it was getting late in the day, and I certainly couldn't afford a hotel room in this neck of the woods. I had a sleeping bag in my checked luggage, but it was already in Miami waiting for me. What was I going to do?

No problem, mon! This is the Caribbean. Life is slow. Things will work out.

I had been to Key West a couple of times before, so I knew the ropes. In those previous trips, I secretly slept in the bushes near the airport in the shadow of a "No Camping" sign, but I had a sleeping bag then and wasn't pressed for time.

Key West is a long way from Miami: about 4 hours if you drive yourself. However, you can also get there via a series of public buses taking a minimum of six hours and sometimes a whole day. You're not traveling with the chickens but pretty close to it. One advantage, however, it that it is cheap: only about $10 for the whole one-way trip.

I knew I couldn't get all the way to the Miami Airport by the end of the day (before the closing time of the office that was holding my luggage), but I could make it most of the way. I took one bus to the local community college in Key West where I knew they had WiFi. I plotted for an hour, then started my long journey up the Keys to the mainland.

The Florida Keys are a lot more interesting on the map than they are on the ground. Because they are very flat, you don't really get the sense that they are islands. There are a few nice beaches, but most of the coast is mangrove forest. Mangrove is a dense bush that grows in seawater about a foot deep. It's a fascinating plant in isolation but dull in repetition. The islands are connected by long concrete causeways, which are also more interesting from the air then at the surface.

Don't get me wrong: I love the Keys. They are easy tropical islands to get to and a fine spot for Free Sleeping if you know the environment, but in this case I just wanted to put them behind me.

After some missed bus connections, I finally reached the mainland about 8 hours after I started. It was about 11:00 at night and too late to approach the Miami airport. This was when I put my free sleeping skills to good use.

The last stop for the bus from the Keys happened to be the Evil Mega Mart in Florida City, at the southern outskirts of the Miami area. What providence! At the EMM, I knew I could get a sleeping bag for $9, which was all I needed in a balmy environment like this.

Although it's warm in South Florida, you do need some bedding at night, when the temperature drops into the 60s. The other main issues are rain and mosquitoes. The online forecast told me there was no rain on the horizon, but I was worried about bugs. Just one mosquito can totally ruin your night.

The EMM sold bug repellent, but over the course of the day I saw it wasn't necessary. There were no mosquitoes! Winter is the dry season in Florida, and apparently without rain there are no stagnant pools for the critters to breed in. I have been in the Everglades in the summer when the mosquitoes were deadly, but not here and now.

I went to the EMM and bought a sleeping bag. Now where should I sleep? That was easy. There was a big open field immediately adjacent to the EMM parking lot and I camped there!

During the day, the site was totally exposed and I could not have done it, but the nighttime is a whole different universe. My analysis of the field told my no one was likely to walk through here (no trails and no trash), and the darkness made me completely invisible, even to the security guards circling in the parking lot.

The photo above shows my set-up, about a hundred yards from the lighted parking lot. (The blue thing isn't a pillow; it's just an airline blanket.) It doesn't look like much but it worked! The grass provided adequate padding, and not a single mosquito visited me. I slept soundly until my cellphone alarm woke me just before dawn. I rolled up my sleeping bag just as the sky was getting light then continued my journey to the Miami airport.

Mission accomplished! Against impossible odds, I got from San Diego to Miami via five planes, six buses, one train (in Miami) and a lot of walking. All together, it took me 48 hours and cost me little more than $20 including the sleeping bag.

So what did we learn from this experience?


1) Everything you need for survival can be found at the Evil Mega Mart.

2) You should research everything you can on the internet, but you actually have to test the environment before you know for sure what it is like (re: the lack of mosquitoes).

3) Understand the differences between the daytime and nighttime environment.

5) Don't hesitate to sleep "in plain sight" if you can get away with it.

Remember: The only aim is to get a safe, comfortable night's sleep, by whatever means necessary. It doesn't have to be pretty. Martha Stewart would be appalled, but that's why we don't invite her!


BTW: He are some photos from an earlier Key West visit.
Posted by Glenn Campbell at 6:46 PM