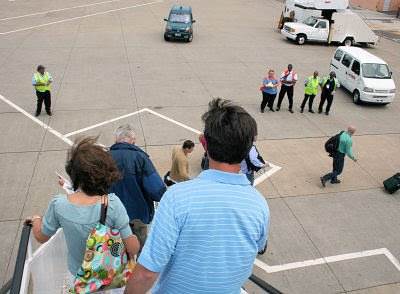 I have just been kicked out of my first country ever: Bermuda. (I was previously banned from Canada between 1995 and 2005 but never knew it at the time and was never actually ejected, but that's another story.)

Heard of it? Bermuda is a little quasi-country (a British territory) in the Atlantic Ocean about 2 hours east of South Carolina. Population: 65,000. It's not really a Caribbean Island, being too far north, but it has all the character of one.

Or so I understand. I spent only about two hours there today and never left the airport. I must say, Bermuda has some of the friendliest customs agents anywhere, but we both realized that the relationship wouldn't work out, so I got back on the same plane I flew in on and came back to the U.S.

I don't need Bermuda, and Bermuda doesn't need me. It was an amicable parting.

Turns out, Bermuda doesn't let foreigners enter their country without a confirmed hotel reservation. Hotel rooms start at about $150 a night plus tax—and that's the hard-to-get budget alternative. Given that my flight cost me only $55 r/t (as a furloughed airline employee) and $150 is more than I normally spend in a week for food and lodging, I chose to decline the offer and leave their country.

I knew the rules but planned to evade them. I never intended to pay for lodging in Bermuda. I was going to Free Sleep, but I got caught.

I had it all worked out. I had done my Google™ Earthing and had identified some wooded areas where I could probably camp undetected. I had studied the local transportation system and knew I could go anywhere on the island on a transit pass for about $12 a day. I knew there were people—approaching 65,000 of them—who managed to live in Bermuda for less than $150/day, so I planned to quietly join them for two nights. In my checked luggage, I had a backpackers tent and a light sleeping bag —which proved my undoing.

I knew that Bermuda didn't allow camping by foreigners and that a hotel reservation was required for admission. This is standard for most Caribbean islands. They want only rich visitors who waste lots of money, not poor ones like me who will take only photos and leave only footprints. I intended to evade these rules by pretending to have a reservation. On my customs entry form, I listed my lodging in Bermuda as one of those overwrought resorts I couldn't afford to stay at (and would never want to even if I could).

All would have gone perfectly to plan had I not made one fatal error: On the same customs form, it asked, among other things, whether I had any food with me. I checked "yes" because I did—some crackers and dried meat—figuring I might as well be honest about everything else apart from the hotel. Big mistake! Having answered "yes" to any of the questions on the form automatically subjected me to a full customs search. The tent and sleeping bag were revealed in my luggage, and I was gently questioned about my plans and the hotel I was staying at.

I readily admitted not having a reservation and that the hotel I had put on the form was "speculative". The customs officers, as I said, were unfailingly polite, and they were willing to work with me to obtain a room "within my budget." Unfortunately, that was $180/night at best, and my ticket had me staying for two nights. The agents asked if I had any credit cards, and I said yes, but that didn't mean I was going to pay $360+ for lodging. I politely asked to be placed back on the same plane I came off of.

Note: If something like this were to happen to you, the airline has to take you back where you came if you are rejected by customs. This sort of thing happens all the time. Things would have got interesting if the flight had been full, but it wasn't. An airline employee escorted me from the customs office back to the plane, which had a two-hour layover.

I want to point out that I, too, was unfailingly polite. I didn't tell the customs officers where to shove their piddling little "country." Nor did I tell them I could get a get a far better deal at a "real" country in Europe. I didn't shout: "I paid fifty-five fricking dollars for this trip and now you expect me to pay more?!"

Instead, I meekly departed, took the two hour flight stateside and selected another destination: Frankfurt, Germany. I know nothing about Frankfurt, and don't speak the language. I pretty much picked it off the schedule board at random. I'm about to board that flight now. The price for me is about the same: $58 round trip. I'll have only 24 hours there (since I have to get back to the U.S. for a work assignment), but I find that's plenty of time to get introduced to a new place.

Like Bermuda, Frankfurt has no hostels (unusual for a European city), and lodging rates are astronomical, but I still have my tent and sleeping bag with me. My online research reveals plenty of potential camping spots near the airport. Quite illegal, I'm sure, but since I camp only invisibly at night, I know I'll get away with it. Since I'm there for only 24 hours, I'll be fine with just a few hours of sleep. (As soon as I get off the plane, I'll find a spot, hide my bag, then come back after dark.) There's apparently a little rain in the air but looks like nothing I can't handle.

And I know they'll let me in. No place to stay? The issue won't even come up at customs.

Take that, Bermuda!
Posted by Glenn Campbell at 4:45 PM