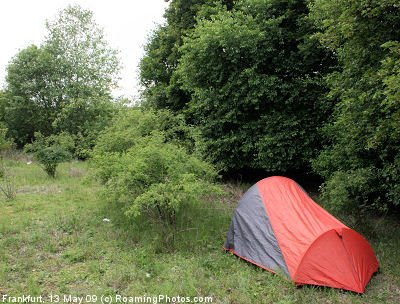 After I got kicked out of Bermuda, I flew back to my hub airport and picked a destination pretty much at random off the Big Board: Frankfurt, Germany. I had never been there before, and the taxes I would pay were relatively low ($58 round-trip). The overnight flight wasn't leaving for about 3 hours, so I had a little time to do some on-line research.

There were no hostel beds in Frankfurt at the time (and only two hostels listed on HostelWorld™), but Frankfurt had several critical amenities to make up for it: (1) the airport was surrounded by the Frankfurt City Forest (Wikipedia), a vast tract of primeval land where I knew I could camp undetected; (2) the weather forecast was good (with only a hint of rain), and (3) The train from the airport to the city was relatively cheap: €3.70 (about $5). I still had my tent and sleeping bag from my aborted Bermuda trip, so I was ready for anything. Furthermore, I knew that I could get into Germany with hardly a raised eyebrow. No one was going to interrogate me about about my sleeping plans or whether I expected to leave vast amounts of money behind in their country. Germany was a real country, not a wimpy little girlie-man country like certain others.

The 8-hour flight was uneventful. Although the plane was nearly full, I used my airplane sleeping superpowers to get about five hours of sleep. Euro-customs, as anticipated, was a breeze. My passport was scanned and stamped without a single question asked. Less than a half hour after I landed, just before noon local time, I was out on the street in front of the terminal

Outside the terminal, my first order of business was to find a place to cache my bag with my tent and sleeping bag. I couldn't do much sightseeing while hauling it around, so I had to hide it somewhere. Most European airports have lockers or left-luggage offices where you can leave your bags for a fee, but the cost can be high and I'm so cheap that I never use them. Instead, I will just walk away from the airport until I find some dense bushes and hide my bags there. I cache only things that I can afford to lose (All of my valuable electronics and documentation remain on my back.) but the chance of anyone stumbling upon my bags is extremely low, especially in the generally human-free zones around airports.

In Frankfurt, I intended to head for the forest, but I was cut off from it by a freeway--like the Great Wall of China--that I couldn't initially find a way through. Instead, I left my bag in some bushes beside the freeway. This little strip of overgrown land was itself secure enough that I could camp here at night if I needed to. I still intended to find a more comfortable campsite in the evening, but my bag was safe for now.

I went back to the airport to find the train into the city. Along the way, I discovered a full-service supermarket in the bowels of the airport (Tegut™), near the regional train station. Not only was there every kind of high-quality grocery you might need (milk, fruit, fresh baked bread), but the prices were much lower than I would ever expect in Europe, let alone at an airport. (E.g. a liter of milk for €0.99--cheaper than the U.S.!) This supermarket could be a key to my survival should I ever decide to stay for an extended period. Since I can camp for as long as I want in the forest (with discretion), the supermarket means I could eat cheaply. The only other essentials I would need are WiFi™ and eventually a shower.

I spent the rest of the afternoon wandering around the Frankfurt city center taking pictures. Frankfurt was more interesting than I expected. There were plenty of sterile new skyscrapers but also some older neighborhoods with a bit of character. My anchor points were the railway station and the river Main, a tributary of the Rhine. From the Hauptbahnhof, I wandered along the banks of the Main until I got to the older touristy parts of the city, then I walked back to the train station through downtown.

I headed back to the airport at around 6pm, but thanks to the long summer daylight, I still had plenty of time to find a campsite. (In the latitudes above 45 degrees, the sun seems to never goes down in the summer. You go to sleep in daylight and wake up in daylight.) After studying some maps at the train station, I figured out how to get through the Great Wall freeway to the forest: Take the Sky Line airport tram to Terminal 2, then walk straight out from the terminal and under the freeway. As soon as you are past the freeway, there is plenty of wooded land. In fact, I had to go only a few hundred yards beyond the freeway to find the secure and private camping spot shown above.

BTW: My tent and sleeping bag both came out of this single average-size duffel bag... 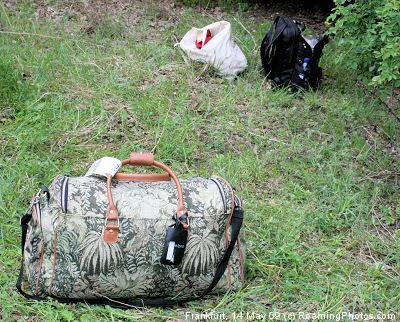 Although I have sometimes managed without it, the tent is desirable for protection from insects, rain, heavy dew at night and wind. Although these northern regions are nearly devoid of life in the winter, in the summer they turn into jungles. I didn't technically camp in the forest but on what looked like some rehabilitated industrial land. Here I could pitch my tent on grass, which gave me some natural padding. Once I had the tent set up at about 8pm, I still had plenty of light to explore some of the actual forest further from the airport, then I came back and slept a solid 9 hours in the tent (going to sleep in daylight, waking up in daylight).

Since this was only a 24 hour visit, I didn't have time to do much the next morning. I awoke at my leisure (not feeling the necessity to break camp before dawn), broke camp, cached my bag, then took the local train to Wiesbaden for a half-hour visit. Then I went back to my campsite for my cached bag and checked in for my flight in the nick of time.

On the flight back, I met the same cabin crew I saw on the flight out. It always amazes them when I say I stayed for only one day (since all they usually see is the hotel), but I find that you get the most from a new place within the first few hours. After that, if you don't have a specific purpose, the touring can get draining and repetitive. 24 hours makes a nice little recon mission, so when I come back later I can do it much more efficiently.

©2009, Glenn Campbell, PO Box 30303, Las Vegas, NV 89173.
Released from Hometown Buffet™, Woodbridge, Virginia.
You can Retweet this article on Twitter™.
You are welcome to comment on this entry below.
Posted by Glenn Campbell at 3:56 AM