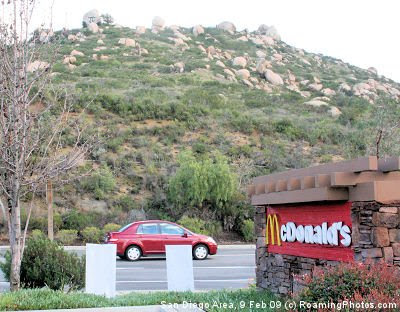 When I first arrived in San Diego a month ago, I quickly scouted out a campsite near the trolley line where I could sleep undisturbed. This "Camp Site Alpha" adequately served me for six nights until the rains came and encouraged me to move on.

Camp Site Alpha was a former landfill in an industrial neighborhood in the inner San Diego suburbs. Like countless other urban sites, it was fine for a night or two but it was not sustainable for the long term. This was land owned by the county government in a relatively dense suburban area, and it was only a matter of time before someone detected my presence and complained to police.

When I rented a car for a day to get through the worst of the rain, I took the opportunity to scout for a new campsite, one I could use anytime with little fear of discovery and few worries even if it happened. While there is plenty of empty land in the remote desert where you can camp almost indefinitely, my camp site had to be accessible via cheap public transportation.

As reported earlier, I found such a site in the eastern suburban fringes about a half hour bus ride from the trolley line. In this area, modest housing developments (mostly well-kept mobile homes) were interspersed with equal areas of hilly open land. To my eye, the land appeared to be "public"—that is, federal land managed by the Bureau of Land Management (BLM).

By default, you have a right to camp on public land. Essentially, you can to live there rent free for as long as you like, providing you don't cause any damage and you move at regular intervals. Local BLM districts, however, may impose restrictions on camping to meet local needs, such as closing certain sensitive or overused areas or restricting the amount of time you can stay in one place.

Having lived in Nevada for 15 years, I was familiar with the wonders of public land. In the open desert outside Las Vegas, you are permitted to camp on one place for up to 14 days, no permit required. After that, you have to move a certain distance away, then you can camp for 14 days again in the new site, and after a certain time has passed, you can return to the original site. By hop-scotching around like this, you can legally live forever on public land and never pay a cent of rent.

The only caveat, however, is that public land is typically very remote and usually doesn't give you good access to civilization. "What good is civilization?" you may ask. Spend a few weeks on a desert island, and it will quickly become obvious. While isolation is nice in small doses, at the end of the day you need the food, supplies, services and "data connections" that only civilization can provide.

The hills east of San Diego seemed like paradise for my purposes, offering all the anonymity of the desert but also easy access to a modern city. I still don't know whether this is public land or what the camping regulations are, but these technicalities are irrelevant. When I encounter what looks like public land, unmarked by any signs or fences, I assume it is the responsibility of the landowner to tell me what the rules are. For my own safety, it is my intention to camp secretly, with no indications of my presence, so no one is likely to get irritated or have a chance to tell me anything.

The first patch of land I explored by car was already occupied by homeless people. These were the smelly "homeless homeless" I have spoken of before (those who are either substance abusers or mentally ill). You know their encampments by the huge amounts of trash and "supplies" they gather around them (a phenomenon I call "packratting" that I will discuss later). It's obsessive and dysfunctional behavior that makes a vacant lot look like a trash dump, but it was a good sign to see here. I could see that a dozen homeless people were living on a 20+ acre block of land for an extended period without being disturbed. It meant that if I camped in a more remote location and kept my presence discrete, I too could camp here indefinitely. (The authorities would have to uproot the more obvious homeless before they ever bothered with me.)

I continued tracing the bus route away from the city and finally came upon Nirvana: a vast band of hilly land close to essential stores and services but with few signs of other homeless. This was a landscape of weird rock formations and large bushes with plenty of nooks and crannies to sleep in undetected. This land extended for dozens if not hundreds of acres away from the bus line, so if I wanted more isolation, I could simply hike further in. 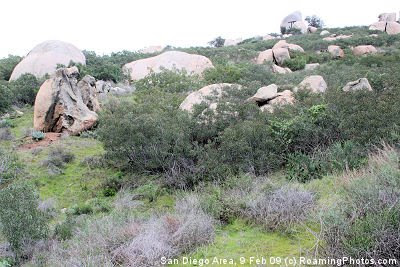 I christened the whole area Camp Site Beta in a brief ceremony.

For policy reasons, I choose not to reveal too much about the exact location, but suffice to say there is plenty of such land on the eastern extremities of the San Diego transit system. Even if I told you the bus stop, however, it is highly unlikely you could find me; that's how complex the terrain is.

The photo at the top of this posting shows one entry point to Camp Site Beta. (There is probably enough data in this image for you to find the place, but you would have to work at it, which suits my policy.)

While exploring Camp Site Beta, I found remarkably little trash. As I hiked to the top of the hill shown in the first photo (which is a lot bigger than it looks), I saw archaeological evidence of a couple of very old homeless-homeless camps, but nothing recent. As I came down, however, I found that I was not alone. Nestled behind some tall bushes, I noticed two alpine tents... 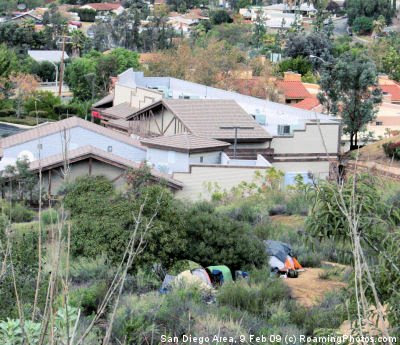 Unlike the trash-strewn encampments of the homeless-homeless, this campsite showed signs of intelligent design! The occupants had followed the same instincts I did and had chosen a campsite that was completely invisible from any road or house. (In the photo above, the telephoto lens makes the campsite seem closer to housing than it really is.) You would have to hike up the hill like I did to see the tents. I didn't approach the campsite to introduce myself—That may come later.—but these looked like my kind of folks! They showed every sign of foresight and wisdom in their site selection; their campsite was well-kept; they looked comfortable, and they were attempting to keep a low profile.

My exploration suggested that the Camp Site Beta area was perfect for my needs in every way. There was, however, one sad thing lacking in the area. It's absence was beneficial to me but probably not a good sign for society at large: There were no kid tracks!

Once upon a time (like the pre-internet era when I grew up), local kids would have regarded a big area like this as their play zone. They would have ridden mountain bikes here and built forts, with or without Keep Out signs along the boundary or perfect weather outside. Today, kids are addicted to video games and online entertainment, and they rarely go out. As I surveyed the boundaries between this land and adjacent housing developments, there were no fences or signs but virtually no trails between one and the other. Where are all the children? It's a question I haven't fully answered.

While I had the car, I transferred my tent and sleeping bags from Camp Site Alpha to Camp Site Beta. Then I turned in the car at the airport, worked for the day at the college library and returned to Camp Site Beta after dark for my first night sleeping there. There was rain in the air, so I had to use my tent. It rained moderately all night, but I stayed dry. In the morning, I broke camp before dawn and cached all my camping equipment in a virtually undetectable spot among the rocks. (If any of it is stolen, I can quickly reconstruct it from the nearby Evil Mega Mart.)

After that, I had to leave San Diego for a while, to pursue something resembling "work". Although I spent only 8 nights in San Diego and one night at Camp Site Beta, I felt that I had proven the viability of the area. I survived some of the worst weather San Diego can dish out, so it should be easy going any other time. For its fine weather and excellent amenities, I expect to treat San Diego as my "home" whenever my travels and commitments don't take me elsewhere. It could also end up being my more permanent base when my Magic Travel Pass runs out.

At the moment, I am on sabbatical of several weeks pursuing this "work" thing. After all, I need some way to pull together the $15/day I need to function in San Diego. Of course, I prefer to "work" as little as possible, which is the chief benefit of the Free Sleeping lifestyle.

Why should you waste your days slaving for The Man when I all you really need is a safe place to sleep?
Posted by Glenn Campbell at 5:02 PM