Back at Camp Site Beta 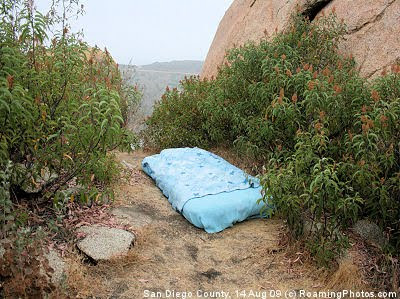 I just spent the past week at Camp Site Beta, my semi-secret campsite in the hills of San Diego County in California. It had been about three months since I had slept there last, and I was pleased to find that everything was pretty much as I left it.

As described previously, my campsite is on an overgrown hilltop and can be reached only by a strenuous 20-minute hike up a steep slope from the nearest road. The trail is challenging enough during the day but very difficult to follow at night unless you know it. I deliberately chose this hard-to-reach location because it gave me a healthy buffer between myself and the rest of humanity. I use the site for only a single function: sleeping. When one is asleep, one is by definition vulnerable, so if I couldn't protect myself with walls, I would do it with space and terrain instead.

I usually hike to the campsite at night, but when I first returned to San Diego a week ago, I chose to hike in the early evening while it was still light so I could check the site for any changes.

The green grass had turned brown (in preparation for California's fire season), but otherwise the area was as I left it. When I left 3 months before, I had cached a sleeping bag and some blankets in a semi-hidden location against a rock. The location wasn't visible unless you happened to walk within about 20 feet of it. When I came back, the sleeping bag was gone but the blankets were still there. I wasn't alarmed by the loss of the sleeping bag. It only meant that during the past three months someone had been prowling in the area during the day, seen the sleeping bag (in an easy-to-carry pouch) and snagged it. I probably would have done the same.

The idea of caching is that you leave behind only stuff you can afford to lose but that would helpful to have. The sleeping bag had cost me only $10 at the Evil Mega-Mart™, and I had already used it for a few weeks, so I could afford to lose it. The greater difficulty, though, was that I would have to go down the hill and back to the EMM to replace it—at least an hour-and-a-half journey. On that first night, I chose to work with what I had—the blankets. The visitor hadn't bothered to take those, since they were bulky and somewhat ratty queen-size blankets that would have been difficult to haul down the hill. With them, I made a bed with four blanket layers below me and two above. It wasn't the peak of comfort, but it got me through the night. I was close to the dirt, but it was nothing a shower at the health club couldn't take care of in the morning.

The temperature, of course, was close to ideal. The great benefit of the San Diego area is its mild weather: not too cold in the winter, not too hot in the summer. Right now, it's in the 60s at night and rarely higher than the 80s during the day. The brown grass indicated a lack of significant rain, which is great for camping.

With no source of standing water, there are no mosquitoes. On this stay, however, I encountered a new creature: ants. They were little tiny ones that crawled all over my bed at night. Ants might freak out most people, but I hardly noticed them. Unlike some you encounter near Las Vegas, these were not biting ants. They were just doing their antly thing of looking for sugar. On the first night, they found this in my bag in the form of trail mix, which they had swarmed by morning, but they didn't mess with me personally, since I am sugar-free. The only annoying aspect of their presence is that one of their party would occasionally crawl into my ear canal and do a dance on my eardrum. It's pretty hard to sleep through that! All I had to do, though, was wait for a couple of minutes, and the ant would find his way out.

Unacceptable sleeping conditions, you say? I simply see the ants a cost of business. I am at peace with the flora and fauna here, and I figure that five minutes of noisy rummaging in my ear was a small price to pay for the free lodging. In fact, it happened almost every night this past week: an ant would wander into my ear, rummage around in my head and walk out again. A crying baby would be worse, since I would have to do something about that, but with the ants all I had to do was wait. Yes, they wanted my sweets, so I stopped bringing any food to the campsite that wasn't in sealed packages. (And it was not my intention to use the site for eating anyway.)

On the second night at the campsite, I brought up a new sleeping bag, and on the third I brought an air mattress. At that point, I was living in the lap of luxury, getting a perfect night's sleep every night. Once I blew up the mattress (with a battery operated pump I carried with me), I left it in place during the day (as shown above, wrapped in blankets to protect it from the sun). The risk in doing so was low. The worst that would happen is that someone would come by and pop or steal the $12 mattress, leaving me with only the blankets again. It remained in place for 3 days without incident. When I left San Diego yesterday, I deflated the mattress and cached it along with the sleeping bags and blankets, in a more hidden location this time.

My homeless neighbors living closer to the road (but out of view from it) were still present.... 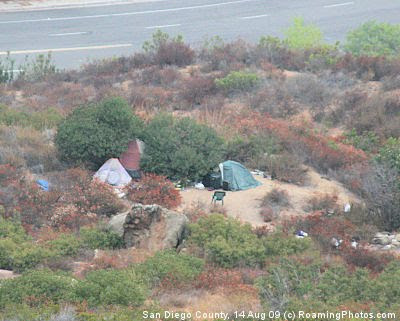 Although I feel no need to introduce myself, I think it is good to have them there, since if the authorities were to clamp down on camping in the area, they would target them first. As long as there are daytime campers near the road, I know my own night-only position deeper in the bush is safe from any government action.

For me, the great advantage of Camp Site Beta is that I can get a lot of computer work done. I do this at the library of a public university in San Diego. It is an 1-1/2-hour commute from my campsite to the university in each direction, but my time is almost entirely productive. On public transit, I use my BlackBerry™ for Twittering™, Facebooking™, reading email and reading news sources. At the university (which is open to the public), I can work without interruption for 9-10 hours until it's time to head back to the campsite again. As an internet-based lifeform, this is Heaven for me, and I only wish I could be here more often.

And I am completely free! Unlike staying with friends or family members, no one is expecting anything of me here. I can use my time as I wish without interruption, and my costs are extremely low. Apart from fixed monthly costs like my BlackBerry, I can survive comfortably here on $15 day. (That's $5 for a daily transit pass and $10 for food and sundries.) What else do you need? (Um, well maybe a medical plan and a bit more of a financial cushion.)

I do engage in various forms of economic activity to make money, but whenever I have a choice between time and money, I will usually choose time. Right now, I feel that there is no better use for my time than to be able to work on my online projects for 9-10 hours a day.

To win this free time, I am willing to skirt the law, accept a little dirt and even let ants dance on my eardrums. It's still a comfortable life!

Posted by Glenn Campbell at 6:15 PM