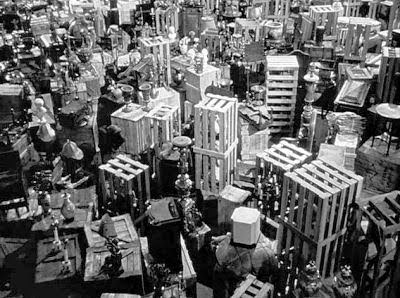 Ones possessions will expand to fill whatever storage space is available.

In other words, if you have a 5x10 foot storage unit, you will fill it, but if you have a 20x20 foot unit, you will also fill it. That doesn't necessarily mean, however, that your life is better with the larger unit. In fact, it is usually worse, since all that extra stuff has to be managed and cared for.

The reason possessions expand to the space is simple: It's tough to throw things away. If there's a possibility something might be useful in the future, we want to hold onto it, but our attachment to out stuff is usually more emotional than that. We have made an emotional investment in almost everything we own, and it is hard to break that bond. What other people might see as just a blanket you might see as a blanket with memories attached to it, and you would no sooner throw it away than you would throw out the memories.

As a rule, people get rid of stuff only when they are forced to by some kind of hard constraint, like money or storage space. When you happen to have the extra space, it's easier to just put the problem off by throwing the item in storage and forgetting about it.

The analogy also applies to hard disk drives and data storage. Whatever megabytes or gigabytes or terrabytes you have attached to your computer, you'll soon fill them up, but this kind of storage is a special case. Data storage gets cheaper and cheaper every year, so we start doing different things with it, like working with photos and videos. We don't necessarily become less efficient.

The same can't be said of physical storage. The more we have, the more we'll use, and the less efficient our lives become. It's a straight-line graph: The more stuff you have, the more complicated your life becomes. Therefore, merely the presence of storage space invites complication.

If you have very little storage, then you'll use it wisely. When you run into your hard boundaries early, you have to make those hard decisions early. Yes, this blanket has emotional meaning, but if its physical value has ended you've got to get rid of it sooner or later, so you might as well do it sooner. (Either that or your heirs will do it for you.) If you have limited storage, then you are forced to do it now, because you have no choice.

Every possession you retain has to "pay its way". That is, its practical function to you in the present and near-future must justify the object's ongoing room and board. It's a hard calculation to make because each object has those emotional attachments, but it's a lot easier to do when you've run out of space and something has to go.

The situation is much clearer when you have to choose between keeping Object "A" or Object "B". If one object has a practical use while the other is purely emotional, the practical object is usually going to win.

Since it's so hard NOT to fill storage when you have it, perhaps the best form of discipline is to not have the storage to begin with. If you have the opportunity to increase your storage space by whatever means (bigger apartment, bigger suitcase, whatever), you need to think hard about doing it. The long-term costs may be much higher than you think.

You could argue that every person needs at least SOME storage. You have to have some space for a change of clothes, some paper records, a few tools you use all the time and maybe a few precious keepsakes. It's hard to say where that point is: 10 square feet? 100 square feet? There's got to be a point where the costs and benefits of storage are in balance. I contend only that the necessary storage is much less than most people think it is.

Precisely because data storage is now so cheap, perhaps half of our past physical storage is now obsolete. You don't need to keep paper bills and bank statements if you know they'll always be available online. There's no need for photo albums and scrapbooks if the same sentimental stuff is stored on Myface or Spacebook.

Also, many of the objects we used to pick up and take home -- like rocks and shells or ticket stubs from places we have been -- can just as easily be photographed and remembered that way. Turns out, we don't really need the physical object as much as we need the link to the past memory.

For the supplies of living, you can often lower your own space requirements by the judicious use of "storage shifting"—that is, by getting others to store things for you.

An example is buying food from the supermarket. They sell things in both small quantity packages and large quantity packages. Technically, you usually get a much better deal if you buy the bigger package, but then you are forced to store any unused product. Over time, this excess from many different products can require substantial space. Of course, no one wants to throw out, say, a half-bag of unused rice, because it feels like you're throwing out money, but it might take years to use it all up and the various costs of storage can add up. Sometimes, you're LOSING money by holding onto something like that, not to mention the clutter and complication it adds to your life.

Sometimes, the smaller quantity is the smarter move. You're essentially paying the supermarket to warehouse the food for you. When you actually need it, you'll go to the store and make a withdrawal, but until then managing the inventory is their problem.

You probably also have friends and relatives who are collectors of stuff, and if you are crafty, you can simply give them many of your possessions. They'll think their getting a gift, but you know it's just a way to get rid of something without throwing it away. Maybe that emotion-laden blanket can be sent to this "halfway house" where you can still visit if you feel you need to.

You can be sure that no matter how efficient you become, there will still be plenty of people around you collecting useless possessions. You don't need to change them. Just give them your stuff and let them deal with it.