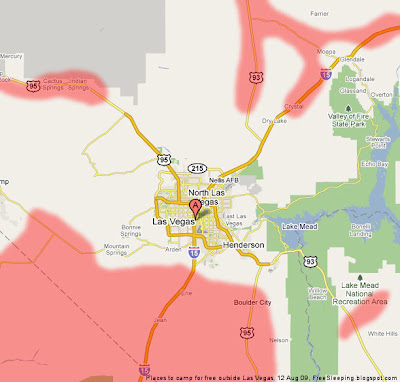 Areas in red are good places to camp.
The Convention and Visitors Authority make not want you to know this, but you can sleep for free in Las Vegas! Well, not actually in Las Vegas, but about a half hour outside it. If you have a car, an air mattress and a sleeping bag, you can sleep in the open desert! It's free; mostly legal and it could be the best sleep you've ever had, especially in the summer.

In summer? Who'd a thunk it! Although the desert in summer is beastly during the day, the temperatures are comfortable at night (that is, if you get away from the concrete and pavement of the city, which hold the heat). It's like going to sleep in perfect bath water. You need the sleeping bag because it can get a little cool by morning.

You don't need a tent, because there's little chance of rain, no mosquitoes and no prying eyes. What about snakes, spiders and other creepy crawlies. They're a myth mostly, perpetuated by all those sensationalist nature shows on TV. The chances of you running into any of them are extremely thin, and when you do, they're going to try their best to get away from you. (In my 20 years in the desert, I've seen only three rattlesnakes and three tarantulas, all of whom were desperately fleeing me.)

Nature provides the alarm clock! In the summer at least, you won't be sleeping long after dawn, 'cuz you'll get baked if you do!

To find a campsite, head north or south on I-15 and look for the open desert. In the south you can exit at Sloan or Jean and in the north you can exit at Apex/US-93. (See areas in red on the map above.) As long as you arrive before dark, you can easily locate a place where you can camp discreetly without being disturbed. There's a vast ocean of empty land out there. If you want more privacy, just go further from the city.

You can camp comfortably with a single sleeping bag for maybe 6-8 months of the year (roughly April through October). In the winter, you might need two sleeping bags or sleep in the car. There are perhaps 5 days out of 100 when the weather (wind or thunderstorms) makes camping uncomfortable, so that's when you get a hotel room.

I did it for a couple of YEARS, so I should know! (During the protracted divorce phase.) Turns out, sleeping in the desert not a hardship in the slightest. It's a convenience! My commute was not much more than the average suburbanite. The only thing I needed was a shower, which I got at my health club, 24-Hour Fitness™. (You can probably get a day pass at most clubs, or you can check into a motel when you smell really rank.)

It legal to camp in the desert? It depends on how far from Vegas you are. On BLM land (most of the desert of the Southwest) it is generally legal to camp in one spot for up to 14 days. (See earlier entry.) Within the Las Vegas Valley, it isn't legal to camp on BLM land, but honestly, if you are discreet, there's nobody to enforce either rule.

(BUS OPTION. It's probably best to have a car, since it's hard to get to the desert via public transportation. The only way I can think of to reach reasonably safe desert is to take the CAT bus that goes from Downtown Las Vegas to Boulder City (Route 402). Get off at Nevada State College then hike to the desert. WARNING: Not field tested. The land behind the Railroad Pass Casino (north of US-93) may be private and casino security might chase you off if they see you. (But not if they don't see you.) Check out the area on Google Earth/Google Maps. It actually looks promising! My only concern about this area is that it's fairly intensively used by off-roading locals, but the mountains could provide some cover.)

Are you safe? It's a huge desert, and criminals got to find you, right? Someone's got to notice your presence, which is unlikely if you choose your camping spot well. There aren't many roving biker gangs these days, terrorizing campers. (There are only lawyers and accountants pretending to be roving biker gangs.) In general, anyone you encounter in the desert is there because they love the desert, not because they want to hurt anyone. In casino hotels, on the other hand, there are plenty of people who would steal you blind if they could.

Cost savings aside, I find sleeping in the desert far more comfortable than sleeping in a casino. The simplest reason is that you don't have to haul your bags in and out! You're also sleeping under the stars in the outside air, with nothing between you and the environment. It just feels more... real!