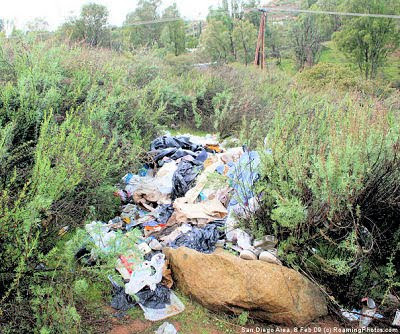 In the previous entry, I talked about how ones possessions tend to expand to fill whatever storage space is available (Campbell’s Law of Storage). In fact, this is part of a broader human phenomenon I call packratting, or the obsessive collection of physical objects of little or no practical value. I believe the irrational collection of “stuff” is programmed by our genes, just like our lust for sugar, fat and salt. It is a behavior that served our species well in our prehistoric past, but it’s mostly dysfunctional in the modern world.

The most extreme human cases are those in which a person's mental processes have deteriorated. People with Alzheimer's are notorious pack rats. When your brain is slipping away, you tend to hold on ever more jealously to your stuff: old newspapers, used containers, old trinkets and remnants of anything that might, by some stretch of the imagination, be useful someday.

Our brethren, the mentally ill “Homeless Homeless”, also display this trait. Their greatest burden to local communities is the vast amount of trash they usually collect around them. When you stumble upon a homeless “nest” (like the one shown above), you find that it usually consists not just of sleeping bags and blankets but also a messy inventory of broken equipment, rotting clothing, odd bits of hardware and other semi-useless things the homeless person has collected in his travels. To us, it is just junk, but to him it is a precious resource and an extension of his psyche. If he happens to be present when you pass through, he will guard this stuff just as zealously as any suburban homeowner would defend his domain.

It seems that if you take away someone's higher thinking processes, they will still have the urge to to horde things. It's a deeply programmed behavior because there's an obvious survival benefit in it. Why not? If you are living on the edge of survival, it is natural to want to collect things that might be valuable later. If you find a free bit of clothing, why not take it back to the nest? Even if the probability of use is low, it makes sense to stockpile it anyway.

Many animals have a motivation to horde food. If you have an excess of it right now, it's a good idea to cache it in case you need it later. Humans go one step further in that they also horde tools. Once mankind started working with tools (knives, spears, grinding stones, etc.) a natural behavior must have developed simultaneously: the desire to stockpile those tools, treat them as possessions and regard them as an extension of oneself. Once you have invested in making a knife, you don't want to lose it. This is "my" knife and you can't have it because at some point my survival might depend on it.

The concept of "possessions", which we now treat as a natural law, probably didn't exist prior to our invention of tools. Many animals have territories and harems, but the presumed ownership of objects is mainly a human trait. In human prehistory, if a person made or purloined a tool, it was to his advantage to treat it as part of his body, protecting it and fending off threats to it like it were a limb. The more tools and supplies you could horde and protect, the more likely you would have the thing you needed when your survival was at risk.

Just like a spider spins a web and guards it, humans create a web of possessions around them. If you touch the web, you alert the spider, and if try to take some of it away, she'll go into attack mode. "Don't mess with my stuff!" she snaps, showing her fangs (gender selection deliberate).

If you think this behavior is limited to the mentally ill, think again! A soon as an average human has a few extra resources at his disposal, what does he do with them? He starts collecting stuff! The more resources (and storage space) he has, the larger his horde grows. Usually, each new acquisition is accompanied by a rationalization: Somehow this object is supposed to be "useful" in the future—but you and I know how hollow this is. When people have excess resources, only a tiny percentage of the objects they acquire are truly useful. The rest are "vanity objects" added to the web only because the acquisition itself feels good.

Whether it's teenagers in a shopping mall, a millionaire collecting boats or a homeless guy rummaging through trash cans, the impulse is the same. Call it the thrill of acquisition. We are programmed to do it: to stockpile resources whenever we have access to them. What evolution doesn't prepare us for is what to do with the stockpile when it grows out of control, because historically this was never a problem. To Early Man, you could never have enough stuff, just like you could never have enough fat and sugar.

In the modern world, people still follow this impulse. Typically they collect stuff until their lives are crippled by it and they can collect no more. It's so difficult to get rid of stuff because each new object gets knitted into ones emotional web. How many objects do you now own that you know darn well are useless for anything? You keep them only because they hold emotional value for you. That won't be gotten rid of unless you are forced to do it.

When does the collecting behavior end? Usually at death! Then someone else has to deal with the accumulated inventory (typically with a few garage sales and several dumpsters hauled away). It's a shame, really, since the people who do the after-death cleanup rarely have much care for the objects and are bound to divest them awkwardly.

Is this any way to live and die—only to serve your stuff? If you can learn the art of de-acquisition, and learn it early, your freedom will be greatly enhanced. It is far easier to move with the times if you have only a suitcase full of stuff rather than a trailer truck full.

Better yet, if you learned the art of non-acquisition—not adding to the web to begin with—you'd never have to go through the emotional pain of de-acquisition. If you have a small storage space, and it is already full, then you have to make a rational decision every time a potential acquisition presents itself.

Usually, "Just Say No!" is the best answer.