Free Luggage Storage at the Airport 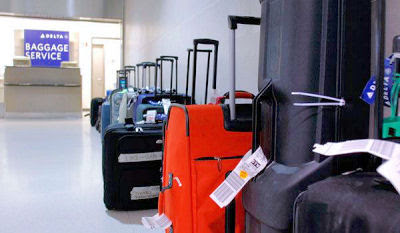 When you're traveling by air, luggage storage (or "Left Luggage" in Europe) can be difficult to find and very expensive when you do. Thanks in part to obsessive security concerns, coin-operated luggage lockers are a vanishing species, and manned offices often have to X-Ray your luggage before they'll accept it for storage. When you do find such storage, you can expect to pay a hefty price to store your bag for even a couple of hours.

I have already mentioned one form of free storage: caching. That's when you find some isolated bushes somewhere nearby and hide you luggage there. If you choose a good location, the chance is low of anyone discovering your hidden cache.

But there's another method of free luggage storage when you are flying into a major airport: Simply don't claim your luggage when it arrives at the carousel! You can leave it there for a few hours, even for a day, and come back for it only when you are ready.

Leaving your bags at the airport might give you an opportunity to explore a new city and get situated there without having to lug your heavy bags with you. Alternatively, it could give you a chance to sleep in the airport, inside security if the secure zone at this airport is open all night. For example, if you arrive at an airport at midnight, you can remain in the main concourse and sleep there until morning, then exit security in the morning and claim your bags. (You can ask the gate agent meeting the flight if in fact the concourse is open all night.)

It happens all the time: Luggage arrives without its passenger. It's the opposite condition of a passenger arriving without his luggage. Both conditions happen a lot when flights are overbooked or there are a lot of stand-by passengers. After your bags circulate for a while on the carousel, they are removed by an airline employee and placed in or near the airline's Baggage Service Office (BSO) somewhere along the periphery of Baggage Claim. When you decide you want your bags again, you simply show up at the office and claim your bag.

In theory, the airline could charge you a storage fee, but in practice, no questions are usually asked. As long as you have your baggage claim check, the airline is happy to see the luggage go away. If anyone asks, you simply say you "forgot your bags," but it's unlikely anyone will.

There are a lot of caveats attached to this free storage service, and I wouldn't attempt it everywhere. Some considerations....
Typically, unclaimed bags go into a "pit", or a condoned-off area in front of the BSO. The bags will probably remain there until the BSO closes for the night, at which point the bags will be locked up somewhere.

Security isn't a concern for bags that come OFF of airline flights, since they have already been screened going on. In spite of all the sinister airport announcements about "unattended baggage," no one at the airline will think the bag contains a bomb. They just want to get rid of the bag.

Keep in mind that when you fail to claim your bag, it is somebody's job to reunite you with it. These are some of the most abused customer service agents in the industry. ("Where the hell is my bag!") Don't make their job any more difficult than you need to. Come back for your bag as soon as you reasonably can, and try to give clear instructions if a BSO agent calls you (like "I'll be there by 2pm."). The BSO agents don't usually need an explanation; they just want to clear out the pit!
Posted by Glenn Campbell at 10:30 AM