Diary, February 7: In the Lap of Luxury 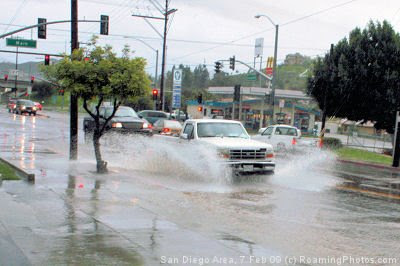 The past 24 hours have brought torrential rains and flooding to the San Diego area. The whole county has been under a flash flood watch. There has even been some hail and occasional high winds. This has to be the worst possible time to be camping!

I wouldn't know, however, because I have been enjoying the spectacle from inside a dry, cozy rental car.

"But wait, Homeless Dude!" you may protest. "Isn't that cheating?"

How so? I'm not trying to go "back to nature" or prove I can live like a homeless person. I am a homeless person. My only goal here is to survive using the limited resources at my disposal, which won't pay for rent especially in an expensive place like San Diego. I can occasionally afford a rental car, however, especially on weekends when the rates are ridiculously low.

The total cost of today's rental: $25.37 plus gas for a compact car. (That's a luxury car by European standards.) Given that the car provides my lodging in the rain, a drying facility for my sleeping bags, a workspace, power for my electronic devices and an exploration vehicle, I'd say that's pretty fair dinkum.

To rent a car, you usually need a credit card, preferably a "Platinum" card or equivalent that covers the collision damage waiver. I happen to have one (albeit with a very low limit). You might protest that not all homeless people have credit cards, but I'm not trying to represent all homeless people. I'm just trying to solve my own problems. On one of the worst weather days of the year, I happened to have a Get Out Of Jail Free card, so I used it.

Last night as I was preparing for the rain [see previous entry], it was not my intention to rent a car, but then sometime after midnight I was deluged by liquid condensate, and my tiny tent (and my clever "maxi-pad") were overwhelmed. I got four solid hours of sleep, but by about 2:30 AM, I was surrounded by the Great Lakes: Lake Michigan at my feet, Lake Superior near my head and Lake Huron over there somewhere. I was still on a dry island in the middle of the tent, but it was getting smaller and smaller, and my sleeping bags were getting more and more soaked.

I dozed for another hour but kept being hit by drops from the ceiling, so at around 3:30 AM I called it quits. I abandoned the tent where it stood, and walked a mile to my 24-hour health club. (I had a dollar-store umbrella, which was sufficient, and I carried my precious electronic equipment on my back.)

I soaked in the Jacuzzi. The homeless life is tough!

I did some calculations and realized that this was Saturday, and rental cars are usually cheap if you keep them over a Saturday night. When I reached WiFi a couple of hours later, I went to the website of the only rental car company I use. (I won't identify the company, but it's named after a fort in Texas that we shouldn't forget.) Sure enough, I could get a cheap car right away at the airport.

A rental car is the Ritz-Carlton of homeless lodging! It takes a few nights to get used to, but I always get a good night's sleep in the back seat of any car. (There's a whole epistemology of sleeping in cars that I'll get into later.) Just as valuable, however, the car gave me an opportunity to explore my surroundings much more efficiently than I ever could on foot.

Once I picked up the car, I first headed to Camp Site Alpha, broke down the tent and loaded all my wet stuff into the car. This was about 10 AM, and everything in the camp was just as I left it at 3:30 AM. The tent was technically visible from the road 100 yard away—a security breach I wouldn't normally tolerate—but being the weekend, there was little activity in this industrial neighborhood and no one to notice me.

I will probably never be back to Camp Site Alpha again, so I can tell you a little more about it now. It is a rehabilitated county landfill about a ten-minute walk from the Gillespie Field trolley station near El Cajon. I don't really recommend the site to the homeless public, because it is across the street from a county maintenance depot where police cars and county service vehicles fuel up. There were a lot of official eyes looking in my direction as they pulled out of the depot, but apart from this morning, there was never anything for them to see.

I used the site successfully for six nights because I keep a very low profile, coming and going only under cover of night and staying only long enough to sleep. Indeed, there are countless hidden-in-plain-sight locations in any city where you can sleep safely and anonymously, as long as you do it only in darkness. However, the rain exposed the basic vulnerability and non-sustainability of the site. While I can sleep just about anywhere for a single night, the more nights you spend in one place, the more risks you accumulate. Eventually, someone was going to patrol the property or see me from the road, and that would eventually lead to a police referral and a poor night's sleep because of it.

I needed a new site that was less vulnerable, one that I knew I could always go to and that offered many potential backup plans in case of rain or other usual events. I needed a Camp Site Beta, and the car gave me a chance to scout for one.

I started by following the bus routes radiating out from the transit centers along the trolley route. Every day I will be buying a $5 transit pass, which is good for both the trolley and bus, so the only issue with the bus is the extra commute time. Ideally, I don't want it to take more than an hour to get from the college library to my campsite.

I hit paydirt on the suburban fringes where there are huge swathes of what looks like public land between the housing developments. The first place I stopped was a big parcels of wild land of several dozens of acres immediately adjacent to a bus stop. The land was hilly and overgrown by big bushes and a few trees. Attesting to its suitability as camping site were several "visible" homeless people already living there. (It's easy to spot them, as they build "nests" and surround themselves with piles of trash. We'll talk more about that later.)

I had no desire to sleep anywhere near anyone else, but the fact that these homeless dudes had obviously been camping there a long time was very encouraging. It meant that if I was camping in my usual low-profile, high-security way, I could stay here virtually indefinitely.

It was significant that there were no "No Trespassing" signs anywhere along the edge of this land, which would be unusual if it were private or local government land. This could conceivably be public land managed by the Bureau of Land Management of the Federal Government, where traditionally you have a right to camp unless told otherwise. When I settle on a particular parcel, I could conduct some research on it to find out.

The first block of land lead me to several others along the same bus route, one of which I will select tomorrow morning as my Camp Site Beta. I will use the car to transport my camping equipment there, then drop off the car at the airport.

I'm excited! This area holds the promise of giving me a stable, safe, sustainable sleeping place that I can always go to. There's even an outpost of the Evil Mega-Mart nearby, so if I happen to arrive with nothing (or my stuff is stolen), I can buy a cheap sleeping bag ($9) and a tarp ($5) and be back in business in no time.

BTW: I got nabbed by the cops today! I took a nap in the back of the rental car in a place I knew was vulnerable—the student parking garage of the state college where my library is. The garage is marked "Permit Required at All Times," but it was raining hard, and I wanted to be able to crack the car window so I could breathe. I figured that this being Saturday, the chance of anyone checking permits was low.

I got caught because I slept longer than I expected (due to my four hours of sleep the night before). All the cars parked around me went away, and my car stood out as unusual when a county police cruiser drove by. The police officer checked the car and found me inside. He asked for my ID and asked me some questions, but let me go.

The significant thing is, I didn't get cited for anything. I was parking without a proper permit and sleeping in a car, both of which are illegal, but I just got shooed away. The officer told me that "sleeping or residing in a vehicle within the city of San Diego" was illegal. I'll have to look the ordinance up, but it doesn't surprise me. There are all sorts of these laws on the books to prevent blatant abuses, but they are mainly used for "shoo away" purposes and rarely result in legal action.

Nonetheless, I now have a contact record with the San Diego County Sheriff and this might increase my chances of getting a citation at a later date. I am not particularly worried. What are the police going to do, cite every sleeping homeless person they come across? It's completely ineffective, since you can't "cite" someone into having a home.

Wherever my Camp Site Beta ends up being, I'm sure there are some sort of restrictions against camping there. However, unless the authorities are prepared to haul away all those homeless people on that first block of land, the regulations are unenforceable. As long as I am invisible and my environmental impact is trivial, it all comes down to a cost-benefit analysis: The costs of breaking the law are very low, while the benefits of doing so are very high.

I got no real problem with being a criminal in that regard.
Posted by Glenn Campbell at 11:59 PM