Diary, February 6: Lessons of the Rain 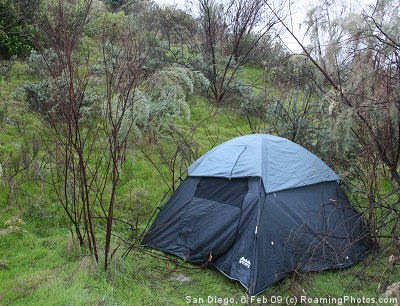 As mentioned in the previous post, I have many years of experience camping in the desert but relatively little camping in the rain. I grew up in New England, where rain was part of the camping experience (and one of the reasons I hated it at the time), but my adulthood affinity for the Southwest has kept the rain at bay since then. Now I'm facing at least three days of steady rain in my first real test of the free livin' life in San Diego.

Last night was my 5th at Camp Site Alpha in San Diego, but my first in the rain, and it went well. Of course, I couldn't sleep in the open air as I normally do, so I used a generic dome tent purchased for $20 from one of the chain sporting goods stores. The tent did its job, and I got a good night's sleep in spite of the light-to-moderate rain all night, but there was some leakage and a few warning signs. The real problem isn't getting through one night, but enduring night after night of rain where more wet accumulates in the bedding each night.

A sleeping bag works to keep you warm only when it is dry. When it is wet, all insulation value is lost and huddling in your sleeping bag is little better than sleeping without any. I sleep with one sleeping bag inside another, and last night the foot of both bags became soaked. This wasn't a problem last night, but if more water soaks the bags tonight I could be in "hot water," in the cold sense.

The seepage problem arises from the fact that the tent is pitched on uneven ground . (See photo.) The sides of the tent were a little wrinkled near the base, forming pockets where the water could pool on the outside of the fabric. Wherever water pools on the outside, it is going to drip inside, so puddles began to form on the floor of the tent. Fortunately, there was high and low ground within the tent, so I didn't have to sleep in the puddles, but my feet were in one, so that's what got soaked.

The seams at the bottom of the tent are also problematic. Wherever the seams turn upward just a little, a micro-pool is going to form, so again the water is going to drip inside the tent instead of flowing outside. (The seams and their design are probably the main difference between a cheap tent like mine and a more expensive one.)

I have various workarounds for the pooling problem. Before I left this morning, I lined the inside edges of the tent with rocks, trying to push the walls out so the water would flow down cleanly. I also tries to turn down the seams by holding them down with sticks (like is visible at the bottom of the tent in the photo). I bought some binder clips today at the dollar store, and I hope to use them to make sure the seams are bent downward.

I left the tent up this morning, instead of hiding everything in the bushes like I usually do, and my sleeping bags and other camping supplies are stacked on a high point inside. Leaving the tent in place is a calculated gamble. It increases the risk of discovery, but the tent can't be seen from the road, and I am betting that the rain will make it less likely that anyone will wander through the wet grass and brush close enough to notice it. The worse that can happen is that someone steals the tent and everything in it (a $65 loss) or authorities find it and leave me some kind of notice of trespass. (I don't really expect anyone to stake out my tent and try to nab me in the act of sleeping there, as this would be a huge waste of municipal resources.)

As mentioned before, this is a large hilly vacant lot next to a light industrial area in a relatively wealthy San Diego suburb. (I can't say more without revealing my position.) I feel completely safe here, as there are no human trails in the grass and no reason for any criminal element to pass through. The land has an owner, San Diego County, but no effort has been put into fencing or marking it. On a walk of the perimeter, I did find one lonely "No Trespassing" sign, but none on my usual direction of approach. (From a legal standpoint, this allows me to claim ignorance, since to prove trespass you have to show proper warning.)

There are expensive houses on the hills on the other side of the lot, but there is no evidence of the most likely intruder in a place like this: local kids. (What kind of kids are these? They must all be inside playing video games!) Although I feel safe and comfortable here, no campsite should be used for too long, and I'll may be looking for a backup site when the rain clears. Ideally, I'd like to diversity over several campsites.

Right now, I am just trying to get through the rain. I left the tent at dawn, and it has been raining off and on all day, so I'm just hoping that there has been no further water incursion. If my sleeping bags become further soaked tonight, I may be forced to take drastic measures, like hauling them to the Laundromat to run them through the dryer. It would be an awkward and time-consuming operation.

I know that everything will dry out in the end, because the air remains dry here whenever the rain stops. However, I am beginning to appreciate how difficult it could be to camp in a place that never dries out, like England (Old or New). If your sleeping bag gets wet there, it might stay wet forever. In that case, I might have to make siting decision based on how close I can camp to a Laundromat!

In all, I don't like this "rain" business very much. It just gums up the works. On the other hand, rain makes the grass grow and gives me some foliage to hide under, so I guess it has to happen. I am sure glad, though, that I can dry myself out in the library for most of the day. It never rains in here!

Oh, here is some wildlife I ran into this morning, encroaching on my space... 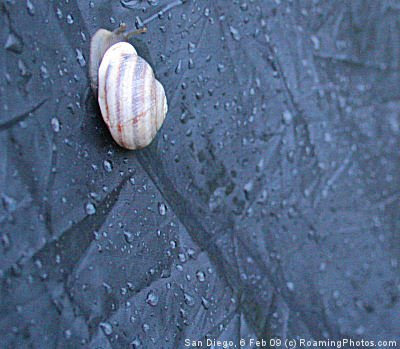 This snail is a little bigger than a quarter, and there were several climbing the tent at the time. When I first surveyed this site, I noticed snail shells everywhere—on the ground, in the trees. I thought they were all dead, but the rain revived many of them. Now they're sliming up my tent!