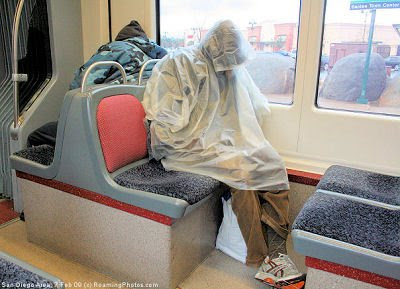 I have tentatively titled this blog, "Homeless by Choice," because that seems to be the popular term for what I do. I think it refers to someone without a stable sleeping location who has some resources and is capable of obtaining a traditional residence if he chooses to. This distinguishes him from the truly "homeless homeless" who have no resources and no choice about where they live.

But the term also irritates me, because "choice" is such a tricky concept. I don't think anyone sleeping in the wild feels they have a choice about it. Although I have some money, it isn't enough to pay for rent, at least while I am doing the things I want to do. I could struggle to get a traditional "job," fighting all the other newly laid-off job seekers for the few positions available, but my prospects would be bleak, and the whole "job" thing just doesn't suit my constitution anyway. (I get a gag reflex whenever the word is mentioned, so you will kindly refrain from that language, thank you!)

When I plug all the numbers into my equations—what I want to do, what I'm capable of doing, and what the world is willing to give me—I simply "have no choice" but to sleep in the wild. Those equations could change in the future, but my own self-knowledge and worldly experience says that this is the best workable option I have right now—i.e. "no choice."

But then again, we all of have choice, as long as we decide to use it. The only thing that really distinguishes me from my visibly homeless brethren is my resolve to make the best of whatever circumstances come my way. No matter what misfortune may befall me, no matter what freedoms are taken away from me, I will look for the places where I do have freedom and use them to better myself. Every "bad" thing that happens to me I am determined to twist around into something good. In every case, I will take control, chart my own course and not be "victimized" by anything or anybody.

I have talked to quite a few of the visibly homeless and find their attitude is different: "Woe is me!" Once you get one of them relaxed and talking, he invariably has a long-winded story of misfortune that lead him here. He lost his job; there was a divorce; some thugs stole all his money. He might even admit, straight up, that he's a drunk and has no control over it because no one will help him kick the habit. If you listen only to him, it all seems perfectly rational that he has ended up in this sad position.

But what is usually missing from his spiel is any sense of self-responsibility. It is always outside forces that made him this way, never anything he did. Even alcoholism or drug addiction is seen as an external problem, like a thunderstorm he has no control over. "I can't help it!"

Of course, with this attitude, he will never escape from his own trap. If resources ever do come under his control, he has "no choice" but to squander them.

Look at the apparently homeless gentlemen in the photo above, sleeping on the San Diego Trolley. (They remained on the trolley when it reached its terminus, so they weren't on it for transportation.) They must have had at least $5 to ride the trolley, but for a capital outlay of only $30, they could have bought a tent and sleeping bag and slept much more comfortably and securely in the suburbs. You can't claim that they have never had $30, but when they do have it, where do you think it goes? Not to capital outlays, for sure.

There are many invisible homeless facing desperate straits, but they are usually trying their best to improve themselves. The visible homeless, by and large, are not. They have already determined that life has beaten them, so there's no point in trying.

This becomes clear when you start suggesting solutions to the visibly homeless. Why don't you go back to your family in Iowa? Why don't you check out this job program? Why don't you move to a warmer place or a safer neighborhood? What you'll probably hear is excuse after excuse. He's tried that before, he says; it didn't work, so there's no point in trying again. He doesn't object to a donation from you, and he may complain about how the government won't help him, but he's not going to take the initiative to help himself. This is the fatal attitude that no amount of social service can repair.

This isn't a blog for him. This blog is about taking control of whatever circumstances the past has given you—using your choice! It's about designing a life that works for you, regardless of what anyone else thinks of it. If you are not homeless right now but you worry that you might be, this blog may offer some consolation. It may not be that bad!

Whatever cards life deals you, there are clever ways you can play them to your advantage, but you have to accept that you alone are responsible for everything that happens to you. There's no point in blaming society, your ex-spouse, the government, Demon Rum or anything else for your predicament. This is your ship now, and you have to take control of the rudder. 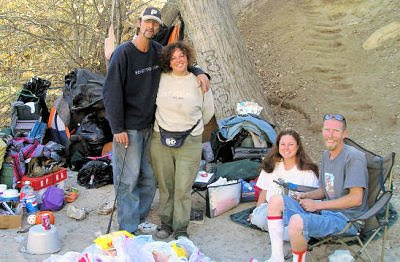 Two couples I met on the banks of the Mojave River in Victorville, California, in November 2005. I'm not sure whether to classify them as visible or invisible.